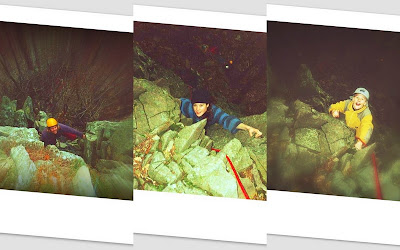 I looked down the first pitch from my stance beside a tree and braced my feet firmly apart to take a fall. The rope ran down in a straight line but disappeared over the top of the steep wall at the bottom. How reassuring the ritual calls are when you're out of sight of each other. Tom's head soon came into sight, and his hands, feeling over the rock, testing holds. 'The trouble with these trainers,' he said, 'is that you have to be careful not to catch them as you lift your feet, or the velcro lifts and they might drop off!'

At the start of the next pitch I placed a left foot high in a groove and made a huge pull, wondering if Tom could find the solution to this problem. I needn't have worried. He didn't hesitate to discover an alternative to the left, and in the polished groove of the third pitch, followed by the foot-jamming crack of the fourth, before the final wall of the fifth Tom kept coming, talking all the time. On the Belvedere I coiled in the sunshine whilst Tom removed the belay before we moved across to peer over the edge a few feet further to the north. Another team were starting the final pitch of Little Chamonix, the leader spreading fingers and toes across the steep top wall. Tom's eyes lit up. Well, we'd come to that. Tom had just done his first route in the Lakes. When you're seven there is plenty of time to feed bonfires.

In fact that very night, instead of dreaming routes ahead, time turned backwards as the young climber blacked his face with the rest of his family and swinging a fearfully grinning turnip lantern set out singing the Lyke Wake Dirge to trick or treat the 'shepherd's house' below Shepherd's Crag. Later that night, the excitement over and young climbers fast asleep, a rustling at the window brought us peering out into the dark to glimpse a witch in black plastic bags riding a beesom round the corner of the cottage.

Tempted closer, after our shock, the disguised shepherd of the crag offered us a drop of `real dragon's blood' to calm our nerves. His little lad, Jason, watched these pagan rites from behind a car, as we brought out the turnip's and the pumpkin's flickering faces to see them off again to their home under Tom's high viewpoint of earlier that day. 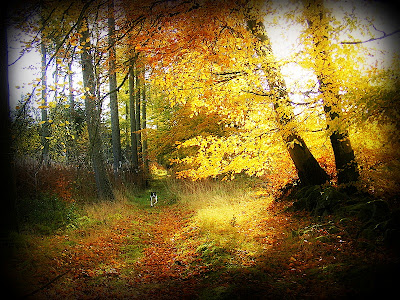 Tom's route, Jackdaw Ridge, makes a final jagged fling and tumble of rock through the trees before Shepherd's Crag disappears round the corner into the hillside and a marvellous walk up to Watendlath. For connoisseurs of Bentley Beetham's detailed explorations of Borrowdale, and this end of Shepherd's Crag in particular, the Jackdaw Ridge actually starts up Beetham's Ant High-way, which matters little. Tom claimed it like a new route and climbed it again next day together with a 30-year-old who had never climbed before, but knew someone else who would love to do it.

However, the following afternoon Kev and Barby arrived for Tom and I to guide them up Knitting Haws. It's a scrappy scramble, but Tom led up all the bits of boulders and little walls that we could find as, unroped, we strung rock and heather together. By far the finest descent is to turn north and follow a track below a wall to a smoothly grassed spur. We fell through deep bracken towards the lights of Grange as dusk closed in.

A wet day and we were pulling fallen branches out of the fields, dragging them down the road to a growing bonfire opposite the Borrowdale Hotel. And still Little Chamonix was receiving continuous ascents. In an afternoon of clearing weather, Tom and I, with three-year-old Ruth, walked into the great bowl of bronze trees that leads to Black Crag. Voices came from Troutdale Pinnacle, a valley route with a big-crag feel that Tom could look forward to climbing at any time of year. I memorised the elegant line of a parallel party on the Superdirect as we slowly explored the orange fell below Greatend Crag. In full autumn colour this is a magic corner of the Lakes, not far from the road. Rowans explode in bonfires of berries along the paths.

November the fifth and I wanted to take Tom on a nostalgic climb in Coombe Gill. I must have been 16 or 17 when I did my first climbing here. We were awestruck working class kids from a Scout troop up Newmarket Road in Cambridge. Des Oliver (creator of Troutdale Pinnacle Direct) introduced us to rock-climbing on his afternoon off from the grocer's shop where he worked in Keswick. I've never forgotten Glaciated Slab since that day twenty- ago when we Fen boys flogged up the bouldered fell towards this whale's back 100ft high. As we youngsters were introduced to the concept of Old Man's Pace up that slope I remember someone stating what became for us the Cambridge definition of steepness: 'I wouldn't ride me bike down here!'

The top of Glaciated Slab is the top of the fifth pitch of a Bentley Beetham creation called Intake Ridge, twelve pitches of Mod that wander up the east side of the entrance to Coombe Gill to the top of Bessyboot. Beetham is supposed to have made these linked scrambles for the initiation of kids into climbing. Glaciated Slab is itself perfect for the purpose as Des Oliver obviously knew. He lit something there that was becoming a recurring ritual. Tom silently soloed up the easy scoop at the top end of the slab. I followed at his heels. Next David Craig, who had come up to Borrowdale for Bonfire Night, started out in big boots up the face in the centre of slab declaring it clearly V Diff rather than, Beetham's grade of Diff. Tom tried hard to solve the problem of the thin crack in the middle, but finally traversed across to find an easier way up for his short reach.

The chimney also proved good fun, taking us out to the open left edge of the outcrop. Finally, David and I soloed the excellent break just around the corner that finishes at the top of the chimney.And then to the bonfire, with fireworks provided by the film director Ken Russell. Anyone who has seen just one of his films can imagine his delight in setting off bigger and better display pyrotechnics. The rockets shot up like flares, lighting Little Chamonix. The first Guy, top of the pile of branches and beds, was quickly consumed and so we then brought on our crucified straw man whose candle eyes flamed from the front of the fire. As his body burnt, the turnip head rolled safely out of the fire for a second or third life beyond Halloween, the Celtic year's end.

The shepherd passed round his tattles from a tin hooked out of the heat of the fire to challenge the bonfire toffee already circulating. We stood facing the heat in the comfortable neighbourly atmosphere.

"I took our Tom climbing in Coombe Gill today on routes that have all got the old sheep counting names, you know. Trod, Yan, Tan, Tethera, Methera .... Do you know them?' `No, I've never used them.'..;They were named by a guy called Bentley Beetham.' Now I remember him. I gave him a lift once. He used to stay in a tin hut beside the road beyond Rosthwaite. He was getting on then, maybe in his eighties, and he could hardly walk along the road. He said he'd climbed a route up Bessyboot that you could walk up either side of....'Intake Ridge! That's where we've been today.' 'Aye and I remember him saying', "They'll never stop me till they nail me down".`Well I hope I'm around when our Tom takes his daughter or son up old Bentley Beetham's routes in Borrowdale!'

As the fire died down at last and we drifted away, the crag bulked black above. It held in the promise of darkness one of Beetham's best discoveries, made a month before I was born. From Halloween to Bonfire Night, Little Chamonix had literally hung over us like the future, to be savoured when it comes ... the spikey corners, aircy stances, the engaging of toes on the slab, the revelation over the knife blade pitch. Well, Tom will come. to that in his own time. Some routes are worth saving to savour in the fired light of leading. 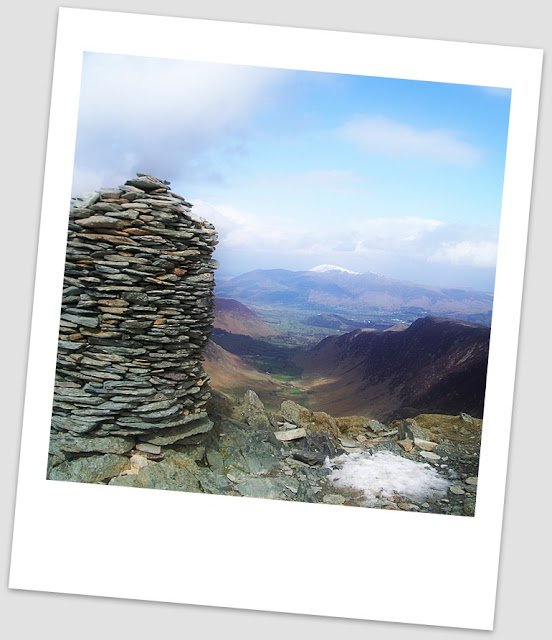