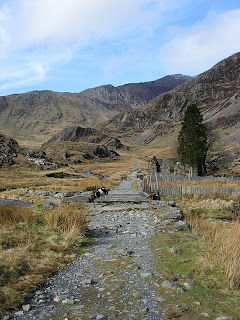 The ever popular Watkin Path with the mysterious 600' mountaineering route high above the cwm dead ahead.

"The thing that drew me to Clogwyn Du was the fact that one of its explorers was Paul Work. A minor figure in Welsh climbing but a fascinating one nevertheless. As someone who started climbing in the 1930's, Merseysider, Paul Work was proposed and seconded for membership of The Climbers Club by none other than those great icons of pre-war Welsh climbing-Menlove Edwards and Colin Kirkus. Despite never being in the same league as Edwards and Kirkus as a climber, Work, by contrast, appears to have been one of those climbers who are content to beaver away at their own limited standard and create their own climbing fiefdoms in areas far from the madding crowd.

For Paul Work it was those quiet places around Nantmor and Beddgelert. The rust red crags of Dyniewyd, the great vegetated hulk of Diffwys on Moel Hebog; the verdant and dramatic Aberglasllyn Gorge and of course Clogwyn Du. The only routes I expect most climbers might have heard of of his are those little esoteric minor classics, Christmas Climb on Craig Dyniewyd and Canyon Rib on the side of Aberglasllyn Pass. Both now graded severe.
Apart from his modest climbing career, Paul Work was essentially a hill  farmer who eked out an existance on the remote farm of Carneddi on the side of Moel Dyniewyd with his wife Janette Ruck whose books Place of Stones and Hill Farm Story anticipated the deluge of 'escape to the country' books written by townies seeking the good life by about 40 years.
Interestingly, Jim Perrin featured Paul in one of his On the Rock With...series of articles in Climber in the early nineties. There he was alongside Stevie Haston, Johnny Dawes and Joe Brown........ Fame at last !' 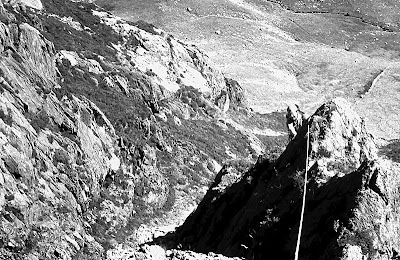 Arthurian writer Scott Lloyd on pitch two of a mysterious mountain route with a secret.


This Friday, John Appleby seeks out an obscure 600' mountaineering route on the flanks of Snowdon and considers the routes creator-Paul Work. Accompanied by Arthurian expert Scott Lloyd,-co-author of the classic 'The Keys to Avalon'- the pair discover that Paul Work's route is at the heart of the Arthurian tale and chance upon the Celtic King's resting place.Less than half a mile from Bwlch y Saethau where legend has it, Arthur was slain before being laid to rest in a cave near Slanting Gully on Lliwedd.