Angel Pavement and other stories 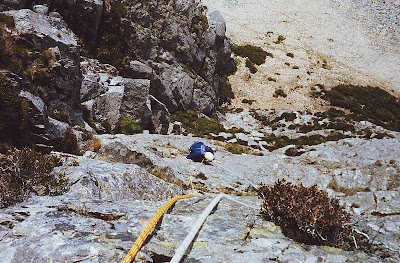 Dave Williams on the long and virtually unprotected 150'first pitch of Angel Pavement.

In 1946 I happened to have the privilege of studying at Exeter University on a short course, seconded from the army. As I had done since my 13th birthday I took every possible opportunity to climb and one of the best occasions was at Whitsuntide when I arranged to stay at the Manchester University Mountaineering Club hut, Tyn y Weirglodd, in Waenfawr. As the sole member of the Exeter University Mountaineering Club, which I had just formed, Ken Pearson, Johnnie Lowe and Teddy Brown welcomed me along with many other MUMC members. On the Saturday, with some trepidation, I made my first foray onto Clogwyn du’r Arddu with Teddy, when we did Longland’s Route. It was wet and I remember taking off my nailed boots, and hanging them round my neck by their laces, to do ‘Faith and Friction’ slab in socks and being very worried that I would drop them as they impeded my movements and swung about hiding the holds. I wasted no time in putting them back on despite Teddy’s complaints when I stood on his shoulders to start the overhang on the next pitch. We had been watched from the shore of Llyn du’r Arddu by a party, which included Peter Harding, Mike Ward and John Barford who had already done Central Rib (which had been put up only a month earlier by Arnold Carsten and G G Macphee) and Curving Crack. I heard later that they had remarked on our slow progress, wondering whether we would need rescuing, but Peter had re assured his companions by pointing out that the leader involved was his “oppo” and therefore could not fail!
Next day the rain really poured down and we climbed Central Ridge on Llechog, which despite being graded Difficult, struck us as being as hard as the climb of the previous day. In the morning the weather was better and three of us made our way to Castell Cidwm, by fording the ice-cold stream behind the hut. We attacked the cliff to the right of the gully, removing a lot of vegetation but not making much progress. Eventually we gave it best and Ken Pearson, the leader, descended with the protection of a peg, hammered in at his high point. We swam in the blue watered quarry pool and then, to warm up again soloed the gully and made our way over to Craig y Bera. The crag of the kite. It is a cliff of romantic ridges a little like Great Gable, but a jerrybuilt version and we remarked that there were no birds, probably scared away by the threat of the unseen predators. Here Johnnie Lowe had his eye on a possible new route and we quickly romped up a series of easy slabs, in four pitches. The overhanging wall defining the right edge of the slabs gradually encroached until we were forced onto the brink of a vertiginous sweep of vegetated rock which drew our eyes to a scruffy gully bed and the plentiful reddish scree beyond. Above us the slab tilted up and became a narrow wall, barely ten feet wide, giving little scope for choice of line. As Teddy and I huddled on a small ledge whilst Johnny addressed the problem the nagging wind grew stronger and the air colder, so we decided to abandon the project and descended what we had climbed, intending to return.
So it is quite clear that Angel Pavement really belonged to Johnnie Lowe. He was one of the ‘Atherton Brothers’ with several good gritstone routes on the Peak District’s northern edges to his credit, and a younger contemporary of Arthur Birtwisle, who had led Dinas Mot’s Diagonal Route in 1938. In 1942 Johnnie’s Manx Wall on Clogwyn Du Ymhen y Glyder was an outstanding find and, a year later he excelled himself by leading Travesty, now graded E1 on that imposing cliff. 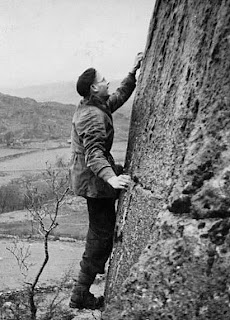 Tony Moulam in his Angel Pavement year-1946-playing around on the Capel Curig Pinnacles: AJ Moulam collection

But back to Tyn y Weirglodd, where I arrived for a second visit on 5 July. This time there was a strong presence of MAM members and Teddy Brown, N A Lewtas and I led various parties up the East Arete of Y Garn.  Still needing some exercise, and with the Craig y Bera Slab willing us to climb it, Teddy suggested we had another look at the route so we ran down to the road and toiled up the treadmill scree to the foot of our climb. The slab was a delight easily followed on good holds and we soon reached our high point of the previous attempt. Here there was a fine securely wedged chockstone in the wide crack to the right of the line. Above us it began to look serious; the slab narrowed and steepened into a wall and the flat holds forced me out to the left, to enjoy the suddenly revealed exposure over the scarp edge. It had all seemed light hearted to here but with nails skating on the glassy rock and fingers desperately searching for non-existent incut holds I suddenly realised that I had to climb. Luckily, after a few worryingly precarious moves things soon eased and I followed a blocky staircase to a small ledge, where I tied myself on, with a sense of achievement and relief.
I called to Teddy to follow me and he moved up rapidly to the crux, paused for a few seconds and then surged up as he found the key. A cold gust of air came up from our left and so I urged him on up the next pitch. The holds all seemed to be wrong, undercut in an awkward way, but his height told and he soon had his hands on a sizeable flake and was able to continue quickly, mainly up grass to a corner and a traverse left beneath steep walls to reach another ledge. The rest was easy broken rock and I soon stood at the top of my first Welsh first ascent!
Naturally we celebrated our success and so it was noon next day before we set off for another foray on Clogwyn du’r Arddu. We followed the Ranger path and enjoyed a belated lunch above the Far West Buttress. The sky was cloudless and we were soon joined by scavenging seagulls that must have spotted that there was food to be had from several miles away! Eventually we abandoned our comfortable rest and scrambled down the Western Terrace en route for Bow Shaped Slab. The reprinted interim guide by J M Edwards and J E Q Barford said it was only Vb, well protected and not such a serious undertaking as the other routes we had not yet done on the West Buttress. The climbs on the East Buttress were supposed to be much more strenuous and difficult, and we did not dream of tackling them.
Bow’s first short pitch gave us no trouble, nor did the second, after we had succeeded in lassoing the spike. The book said that there were two ways of tackling the next stretch and as the one recommended as normal (round the corner into the crack) was very greasy I took the direct option and after a few awkward moves continued up grassy ledges to the stance. Another long easy traverse on more grass ledges below Sheaf and Narrow to the edge of Great went well enough, as did the little crack, awkward at the top, to a small triangular mud stance on the arête. I couldn’t find the “further belays up some yards if wanted” so made do with the three small and loose spikes poking out of the grass. Teddy joined me and we had a few confused moments as we changed places but he eventually claimed that he was comfortable and satisfied that I could proceed. Away to the left the Bow dropped sheerly to the verdant ledges of our traverse and I obeyed the guidebook’s instructions to move ten feet left, I found myself perched on an uncomfortably sloping foothold in the middle of this steep and exposed slab. Above the right hand end of my ledge was a series of three widely spaced quartz rimmed pockets, then a holdless wrinkled wall leading to an apparent sharp edged handhold, the key to the upper slab. 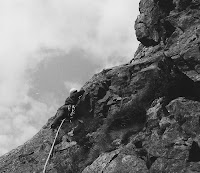 Dave Williams sets off on pitch two of Angel Pavement 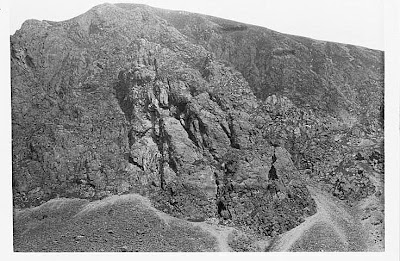 View of the main slab taken by Angel Pavement. Photographed before the first ascent from Y Garn by the author.AJ Moulam collection