Coming up: Part two of Don Roscoe's personal view of the Rock & Ice. 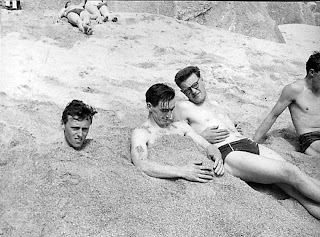 'As we became more affluent we began to acquire motorcycles and eventually old vans and cars. There are probably more stories about the motorcycling epics of the Rock and Ice and of the Cromlech Club- with whom we have always had a very close relationship-than there are of our rock-climbing exploits. Fortunately the roads were considerably quieter back in the 50s and few of our accidents were serious. No longer reliant on public transport, weekend visits to Wales and the Lakes became possible. Conse­quently the motorbike era heralded a flurry of new routes further afield. The Alps were also much more accessible and for our early alpine ventures we had to equip ourselves with state of the art survival gear: ladies' plastic macs (only ladies' macs had hoods). Ray Greenall relates the story of travel­ling out to the Alps with Fred (Count Fred Neddygough) Gough, The first proud Rock and Ice owner of a car. Fred would drive all day and on arrival at a camp site would consider his day's work to be done, pick up a book and read while Ray made camp and started the meal. After a day or two of this routine Ray decided that a change was due. As Fred picked up his book Ray handed him the water bucket and told him to get some water. Fred looked up stricken, total surprise and horror written across his face, and said plaintively: "What, me? I don't speak the bloody lingo!"

This Friday, the conclusion of Don Roscoe's fascinating account of his Rock and Ice days.
Posted by Footless Crow at 09:31