Coming up: Inside the legendary Rock and Ice Club. 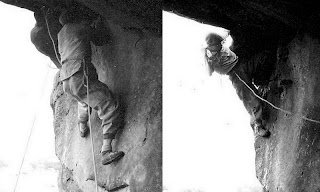 
" Joe Brown, at the age of twenty one, was already becoming a legen­dary figure with many hard routes on grit to his name including such clas­sics as The Right Unconquerable and Brown's Eliminate — the first ascent of which was led by Joe in nails. He was also starting to make his mark on the Welsh climbing scene with his impressive first ascents of Diglyph and Vernber on Cloggy and Hangover on the Grochan. Even at this stage many rumours, circulated about him, the most popular being that he had very long gorilla-like arms and fingers like bunches of sausages. Lack of transport kept us confined to Derbyshire for most weekends; places further afield were re­served for longer holidays. However, there was plenty to keep us going on the grit and it was here, on the fierce gritstone cracks, that Joe perfected the hand jamming techniques which were to open up a new era of British rock-climbing in the 50s and early 60s. Joe was always Alan Taylor's great hero in the early days and I would dismiss him by saying that it was all brute strength. This view was dispelled on the very first occasion on which I saw Joe climb. He was leading the very delicate Great Slab on Froggatt and just made it look so easy that I became an instant convert.
The other truly great climber in the Rock and Ice was, of course, Don Whillans. For quite a long time his genius, was overshadowed by that of Joe, but in fact there was very little to choose between them. Don was built like a mini­ature Charles Atlas and really did have arms like a gorilla; there was no appreciable thinning at the wrist, the solid muscle just merg­ing into the hand. This forearm development was a result of his apprenticeship as a pipe fitter which involved much tightening of huge nuts on large pipes. Don, too, was surrounded by legend --most of which centred around his ability as a fighter, but in the many years of our friendship I never once saw him hit anybody. Usually a threat was sufficient, thanks to the legends. Like Joe he revelled in steep and strenuous cracks and overhangs but he too was equally at home on delicate routes. Don had his own ways of inspiring confidence. The first time I tried to lead Right Unconquerable Don was watching while I made a half-hearted attempt and retreated to assess the situation. To dem­onstrate that I was making a fuss about nothing Don, who was wearing shoes with very thick crepe rubber soles commonly known as "brothel creep­ers', proceeded to solo the route with ease.'

This Friday, part one of a fascinating feature on the legendary Rock and Ice Club from someone who was at the heart of the club- Don Roscoe.
Posted by Footless Crow at 09:36