Coming up: George Leigh-Mallory: Chronicle of a death foreseen. 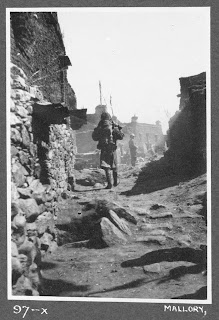 
" But what lay ahead of us ? My eyes had often strayed, as we came up, to the rounded edge above the col and the final rocks below the North-east arete. If ever we had doubted whether the arete were accessible, it was impossible to doubt any longer. For a long way up those easy rock and snow slopes offered neither danger nor difficulty. But at present there was wind. Even where we stood under the lee of a little ice cliff it came in fierce gusts at frequent intervals, blowing up the powdery snow in a suffocating tourbillon. On the col beyond it was blowing a gale. And higher was a more fearful sight. The powdery fresh snow on the great face of Everest was being swept along in unbroken spindrift and the very ridge where our route lay was marked out to receive its unmitigated fury. We could see the blown snow deflected upwards for a moment where the wind met the ridge, only to rush violently down in a frightful blizzard on the leeward side. To see, in fact, was enough ; the wind had settled the. question ; it would have been folly to go on.'

This Friday: George Leigh Mallory...in his own words.