The climb that time forgot. 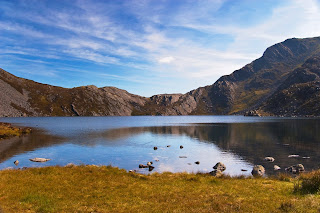 How quickly do times change. The following article was written and published in 1996 and detailed a mysterious mountaineering route in the heart of the wild Rhinog range. At the time of writing, this was a remote and uncharted territory for climbers. The only details offered of the route in question was in a 1960 climbing book by Edward Pyatt called Where to climb in the British Isles and tantalisingly suggesting that a route on Rhinog Fach was 'Once but no longer,the most interesting mountaineering route between Snowdon and Cader Idris'. Little did the author know at the time that the Rhinogs were on the cusp of an explosion of activity led by a super-charged trio of climbers which consisted of the King of Mid-Wales climbing, the late great John Sumner; someone who had already made a remarkable impact on Mid Wales climbing,Terry Taylor and the extraordinarily talented Martin Crocker who it seemed-despite living in the South West of England-could sniff out unclimbed Welsh crags from hundreds of miles away !
The gritstone of Y Rhinogau was about to yeild hundreds of new climbs.
During this period, The Climbers Club were in the process of compiling a new guidebook for the Mid-Wales area which turned out to be a regular 'bumper fun book' of 500 pages. Covering a huge swathe of Mid Wales stretching from Cader Idris to Betws y Coed and including entire mountain areas including the Rhinogs and Arenig Fawr for the first time. Martin Crocker found himself covering the Rhinog area for the guide and quickly discovered the the mysterious route was in fact 'The South Ridge of Rhinog Fach', put up in 1935 by that indefatigable Welsh explorer, Showell Styles accompanied by George Garrard. Incidentally, As I write in 2010; The new CC Ogwen guidebook publishes another 'lost' Showell Styles mountaineering route- 'Eaglet's Nest Ridge' on the Eastern side of Gallt Yr Ogof. One can but wonder when the next obscure Showell Styles mountaineering route will turn up !
In the current guidebook, Martin Crocker essentially uses the route description I offered in the fact-file acompanying the article but has nudged the grade up to 'severe' and awarded it a star.In the intervening years, South Ridge appears to have attracted a fairly regular and favourably inclined clientele.
It should be noted with relation to the history of Rhinog climbing that in fact former Plas y Brenin instructor Nick Gough established first ascents in the area-more especially on the table top plateau peak of Foel Penolau- in the 1960's. These were unrecorded so at the very least Nick should be accorded Rhinog pioneer status with the likes of Showell Styles. 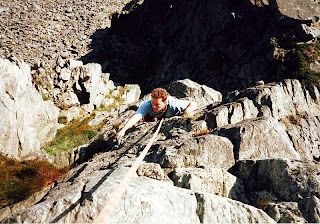 Scott Lloyd on the crux 4th pitch of the route 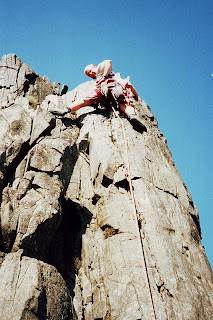 The author tackles the steep little rib on pitch three

The rib was not more than 30ft in length and technically no more than Severe. It provided the hardest sustained standard so far. Pitch four of­fered nothing more demanding than 150ft of scrambling but with some exposure high above the scree fan below. The next pitch proved to be the penultimate and the crux of the route be­ing high above a deep, blind gully which cuts into the ridge close to the top. Climbing a steep, clean slab I was forced out right into a grassy bay by a large, overhanging roof. From the bay I was forced further right on to a blunt rib which was steep and exposed. The climbing felt precarious as for the first time on the route the rock felt some­what suspect and the protection was not overabundant. At this stage the climbing was no more technically demanding than Severe but the steepness and lack of protection made it feel more serious throughout its 60ft than anything previously encountered. With the fifth and final pure climbing pitch completed we were left with 200ft of scrambling to top out within spitting distance of the summit.
With the late afternoon sun still searing in its intensity, Scott and I drank in the vast tapes­try which lay beneath us. To the west the gentle sheltered waters of Tremadog Bay. To the east the sombre, dun hills and valleys of the Migneint stretching towards Bala. To the north, the rag­ged mountains of Rhinog Fawr and Moel Ysgyfarnogod reached out towards their more respectable Moelwyn neighbours beyond and to the south, the high mountain ridge switchbacked its course towards the peerless Mawddach Estu­ary and the ice cream parlours of Barmouth.
We had climbed the 'lost' ridge climb of Rhinog Fach and I pondered my conclusions? Apart from the obscure comments which Edward Pyatt repeats in his 1960 guide I have no idea when the climb was first done, who were the first ascensionists and how it was graded. Be­cause of its remoteness and with the area suffer­ing from extreme underexposure as a climbing ground it is clear that the Rhinogs were never going to draw a regular clientele to the area when there is so much better climbing to be had in the mountainous heart of Snowdonia to the north. The South Ridge of Rhinog Fawr is cer­tainly no Grooved Arete or Amphitheatre Buttress. As mountaineering routes go it is somewhat artificial,­
escapable and lacking technical continu­ity. Nevertheless, there are certainly worse re­corded routes receiving regular attention by tra­ditionalists in the more popular climbing honeypots of North Wales.
The route does throw down some interest­ing challenges at stages throughout the climb. Despite a lot of scrambling involved there is some good climbing to be had on four out of the six pitches and the outlook is never less than out­standing. If you can survive the strength-sapping walk in then the one thing you can be certain of, you won't find yourself queueing with other par­ties at the foot of the climb! 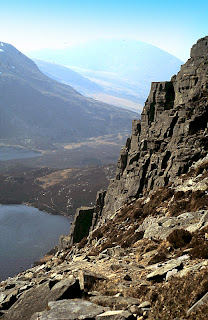