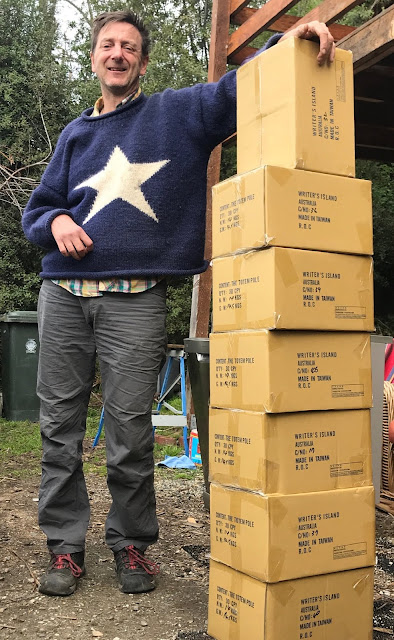 Unless you approached this book thinking it was an anthropological study, examining the belief systems and symbols of the indigenous peoples of the Americas, or perhaps more appropriately, a rock climber who nevertheless has spent the last 20 years in a coma after being hit on the head by a television sized rock, then you must be aware of Paul Pritchard's Totem Pole saga. And indeed it is a saga, which 20 years on still has the power to shock and awe. As survival stories go, the story of Paul's accident, heroic rescue and rehabilitation, stands up with some of the gnarliest tales of triumph over tragedy within the climbing/mountaineering genre. Except this time, the hero doesn't get the girl and ride off into the sunset, fully restored and imbued with sage-like wisdom. Our protagonist loses the girl- girlfriend and heroic rescuer Celia Bull- ends up a smashed up hemiplegic and sees the whole focus of his life, cruelly torn away forever. An experience which left him facing nebulous demons in the guise of anger, despair and confusion. An unholy trilogy of emotions which in those first months after the accident had left him broken, both mentally and physically.

Paul's road to recovery came about by getting the whole experience down in words. A project which manifested itself in the original book which went on to take the Boardman Tasker prize in 1999.. Now, twenty years later, Paul has re-released The Totem Pole after a successful crowd funding campaign which uses his original work as the foundation but as Paul explains in the introduction...”restored my authentic voice which had previously been edited out'.

If anything, The Totem Pole is a story of redemption. Not achieved through overcoming disability and routing those dark demons buried away in the darkest recesses of the soul, but through a gradual philosophical acceptance that things will never be the same again...just different. As intimated above, one of Paul's first steps in his rehabilitation is to write down his thoughts and describe his experiences honestly and graphically. Despite struggling in those early months to articulate these thoughts and put them within a coherent structure, through a grim determination to paint the picture as accurately and honestly as he can, he perseveres . Despite the picture he is trying to paint being more Jackson Pollack than the Pre Raphaelite Brotherhood in those confused early stages when his pummelled brain struggled to make sense of events. Locked in an endless, frustrating ritual of therapy and treatment, he finds solace and satisfaction through working these thoughts out and getting them down. As much to work out the chain of events which had led him to this point and attempt to make sense of the chaos. I'm imagine that when he started setting down these thoughts, the last thing in his confused and groggy mind was 'this will make a great book...Banff here we come!'.

The bulk of what evolved into The Totem Pole appears to have been written in Clatterbridge Hospital on the Wirral, about 60 miles from Paul's then North Wales home in the Welsh climbing capital of Llanberis. Sharing a ward with what sounds like the cast from One Flew Over the Cuckoo's Nest- a cast which the author is never less than sympathetic and kindly disposed towards in most cases- he nevertheless took pleasure in shaping the book in what quiet spaces and moments he can find. I cannot imagine what is must have been like for a climber who was used to freedom, travel and wide open spaces to find themselves imprisoned, amongst strangers. I guess that writing, apart from its therapeutic value, would also be an escape from reality. A pretty grim reality at that but isn't the best art hewn from darkness and struggle?

I'd forgotten that Paul had undergone a similar experience here in north Wales when he took a huge ripper at Gogarth and ended up amongst the Irish Sea washed rocks at the foot of the Zawn. That time, despite being smashed up and subject to a lengthy rescue, the injuries sustained were not life changing. Students of Oscar Wilde at this point might proffer the suggestion that to suffer one such accident might be considered unfortunate, to suffer two such accidents looks like carelessness! But then again, why would a climber who has survived a serious accident not carry on? Perhaps a feeling of immortality might kick in after coming through such an experience? Although some climbers do indeed pack it in and take up something safe like fell running or hillwalking after a brush with death, in Paul's case, as a high end activist of international repute, giving up would never have been an option after an accident. Especially one which you fully recover from. The mental turmoil that an individual experiences after being involved in a serious accident will vary of course from person to person and their investment in the activity.

Fortunately, I have never suffered a serious accident whilst climbing myself. I have however experienced the horror which comes when witnessing a jagged rock freewheeling through the air with flesh and blood within it's terrible orbit. Although not in the same league as that experienced by Celia Bull as she watched 'that' block bulls eye on Paul's bare bonce in Tasmania, I recall a late friend trying to re-direct a sizeable flake of rock he had pulled on, away from me on Craig Dinas in North Wales as I looked on helplessly. Being lashed onto 'The Boulder' and unable to move more than a foot or so either way, I watched transfixed as the flake spun towards me. Growing in size with each nanosecond until it exploded just inches to the side of me. Even worse was when I trundled a huge fang of rock on a ground up first ascent in Nantlle, which twisted 90 degrees from its intended destination, and just missed my then 14 year old son who was belaying at the foot of the rib we were climbing. Its terrible trajectory so close that he felt the rush of air through his hair. The thought of what might have been still gives me nightmares! These accidents are freaks of nature which often defy all attempts to minimise risk and climb safely. Wrong place, wrong time and even the best mountaineer in the world can be swept away in a moment.

In some ways, being injured when climbing through a fall or bad technique can be accepted as it's just part of the game. Being struck by a rock on the other hand, is like being stabbed in the back rather than thrust in the chest by a rapier in a fencing duel. It seems as if fate is not playing fair! The tendency to curse your bad luck and succumb to despair, a debilitating and possibly inescapable condition which may become a prison cell from which there is no escape. The message which Paul, conveys through the Totem Pole challenges this fatalistic mind set. The goal which can be applied to most people who suffer mental, physical or emotional life changing turmoil, to find a way through the maze. Despite the endless dead ends and U turns which bring one back time and again to where you have started your journey. Through perseverance and with more than a little help from your friends, you can find a way through the towering box hedges and reach, if not the point from which you set out, an escape back into the light. 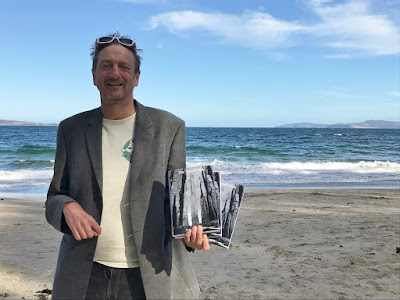 Paul and a handful of Totem Poles: Photo Eli Pritchard

When the Totem Pole first came out two decades ago, it took that years' Boardman Tasker award. A double header for the author after the success of Deep Play. To write a book of any description after having your skull stove in and your brain ruptured and plastered to your scalp, is just about beyond imagination. However, to write an honest account of such a traumatic, life changing event with such clarity, without any self pity or rancour and imbued throughout with that quiet northern self deprecating humour -which friends will describe as the essential essence of the man- is quite inspirational.