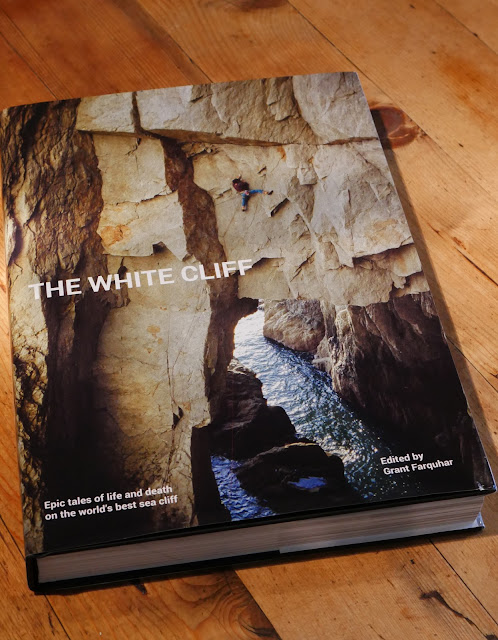 The term 'coffee table book' is generally used to describe an A3 sized doorstop which is brim full of seductive images but sadly lacking in solid writing. However, within the climbing/mountaineering field there have of course, always been exceptions to the rule. Works like Crew, Soper and Wilson's The Black Cliff; Tony Smythe and John Cleare's classic Rock Climbers in Action in Snowdonia- recently republished as a Paperback- and of course Ken Wilson's series of weighty tomes with Classic/ Hard/ Extreme Rock at the heart of the series.

With the recent publication of Grant Farquhar's The White Cliff, The aforementioned The Black Cliff now has a worthy companion within the genre. A diligently researched, skilfully edited and beautifully produced work which features a contributing cast list which appears to include just about everyone who has contributed to north Wales's post 1950's climbing history. It is fitting that Ynys Mon -the land of the druids- should cast a spell over climbers who were drawn to these complex, intimidating cliffs of Ynys Cybi relatively late in the century. Although the RAF had used the cliffs around Gogarth since the 1940's and local activists had dabbled thereabouts in the 50's, the true birth of climbing on these pale cliffs above the Irish Sea began in the 1960's as word leaked out that a stone El Dorado existed way out West. No surprise then that the procession was led by north Wales's leading activists and new routing pioneers . Hard chaws like Pete Crew, Joe Brown and Martin Boysen in the vanguard. To be quickly joined by just about every 'name' in the UK climbing scene and beyond. All magnetically drawn to this fabled climbing terranova. 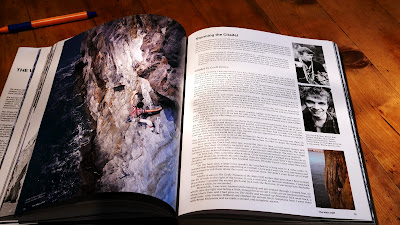 This explosion of activity in the swinging sixties is described by many of those who were part and parcel of the scene. Both the living and through the words of the dead. David Dukan, Geoff Milburn, Les Holliwell, Trevor Jones and Ken Wilson included. One of the more fascinating episodes in this period is 'The Great Gogarth Hoax' as described by Peter Gillman. Then a young non climbing Sunday Times journalist.. It recalls a bizarre case of the climbs that never were. A collection of state of the art routes written up by a climbing Walter Mitty character-Keith McCallum- whose activities quickly aroused the suspicions of fellow activists. Not least the Holliwell Brothers and Pete Crew who were in the vanguard of developments at Gogarth at the time.

As the 1970's brought in great advances in equipment and footwear, standards continued apace and essayists including Henry Barber, Martin Crook and Al Evans describe the relentless drive which delivered classic routes like the 3 star E5 'The Ordinary Route', Positron E5 and the 3 star Moran/Milburn/Evan's E3, 'The Assassin'. With The White Cliff now cooking on gas, the clear blue sky certainly was the limit and as the punk era ended, the 80's New Romantics in the form of Johnny Dawes, John Redhead, Ron Fawcett , Jimmy Jewel and Andy Pollitt took The White Cliff by the scruff of the neck and recorded increasing audacious first ascents. The old master's like Brown, Crew and Boyson could only look on admiringly as routes like Conan the Librarian E7, The Big Sleep quickly fell. By the 90's it was open season on The White Cliff and editor Grant Farqhar opens 'The Raving 90's and the Naughty 00's with Sex and Religion, his serious E7 route at the heart of his revealing essay, Bouncing Czechs'. 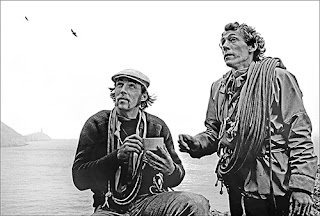 But before I give the impression that The White Cliff is a mere chronological procession, detailing hard routes and their creators, let me quickly confirm that far from being a dry historical account of climbing on the Gogarth cliffs, The White Cliff ranges far and wide across the the entire Gogarth spectrum. Covering developments on every cliff- including Rhoscolyn- but including a broad area of interest with every aspect of climbing covered by over 100 trailblazing pioneers. Contributions ranging from a brief paragraph to lengthy essays and describing the characters, the epics, the exploration, the failed projects, the accidents etc etc. Fascinating and inspirational in equal measure.

It would be unfair to single out any single essay from such a qualitative field of work, or indeed, mention stand out photographs from such a stellar cast of image takers which include John Cleare, Leo Dickinson and Ray Wood. Suffice it to say that the editor has used the whole range of the photographic spectrum to illustrate the essays herein. A worthy project which like the aforementioned tomes mentioned at the start of this review, is destined to be a future classic within the field of climbing literature.

The White Cliff; Editor Grant Farquhar is available at £35.00 from Cordee Publishers

Steve Bowker on Swordfish. The venturing demanded by sea-cliffs feels quite different from inland climbing because you can't see... 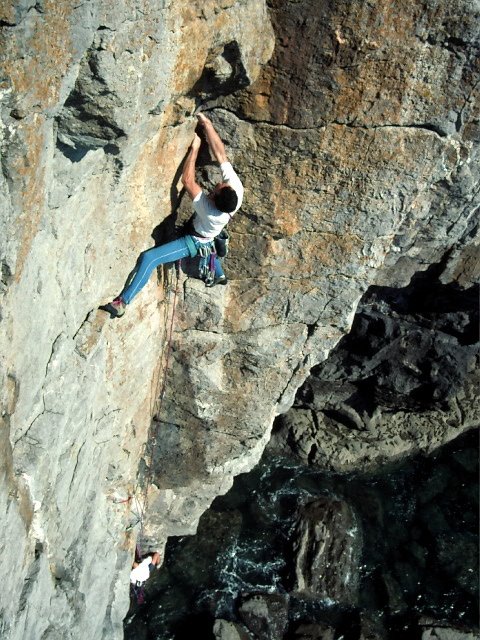