The Battle of Winter Hill 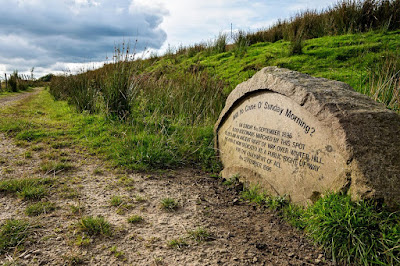 Will Yo' come O Sunday Mornin' Fo a Walk O'er Winter Hill?
Ten thousand went last Sunday But there's room for thousands still!
O the moors are rare and bonny An' the heather's sweet and fine
An' the road across the hilltops is the public's — yours and mine.'

It was the Kinder Mass Trespass of April 1932 that became immortalised in the struggle for `Rights of Way' over England's upland: Benny Rothman cycled from Manchester to the Peak District (as it became in 1951) to lead the march on to the moors, and thence into jail. The historic events in Bolton 100 years ago last year were almost forgotten, until re-discovered by Paul Salverson in his book Will Yo' come O 'Sunday Mornin' (1982). More overtly than the battle for Kinder Scout, politics played its part on Winter Hill, as the popular uprising was diverted into a struggle between the 'Bolton Socialist Party' and  a local squire —the outcome perhaps inevitable in Victorian England. A glorious early September Sunday morning in 1896 saw a surprisingly large crowd gathered at Halliwell Road (barely a mile north of Bolton Town Hall), fired by speeches from the soapbox of William Hutchinson, Joe Shufflebotham and the doughty Boltonian journalist, Solomon Partington. Mill workers and hand loom weavers flocked from the terraced houses that crowded off the main street. Many in Sunday best, they rubbed shoulders with grimy coal miners from nearby pits, as the march grew to ten thousand strong as it reached the Ainsworth Arms, at the edge of town.

Emerging in jubilant mood from Halliwell Road, the long line passed Ainsworth's Bleach Works, then Smithills Hall (imposing residence of the other protagonist, Colonel Richard Henry Ainsworth), on the steady rise where Smithills Dean Road bolts arrow-straight for Winter Hill. The crossing of Scout Road marks the edge of Smithills Moor, as Coal Pit Road continues towards the summit, before contouring to the hill farms. At its high point, a track heads hard across the dark chocolate peat and heather-clad moor; its junction still marked by the original gritstone gateposts quarried from the moor. There the Colonel's men and local constabulary made their stand. Now celebrated by a handsomely carved stone, 100 years ago it saw a dramatic confrontation, where the ancient route to the summit ( 1500') was barred. After the invigorating march from the steaming mills of Halliwell, the ramblers were in no mood to be thwarted.

The Bolton Chronicle reported “... a scene of the wildest excitement...' and 'Amid the lusty shouting of the crowd the gate was attacked by powerful hands... short work was made of the wooden barrier and with a ring of triumph the demonstrators rushed through into the disputed territory'. In the melee, Inspector Willoughby dived over the drystone wall as Sergeant Sefton fielded the flying gritstone. Gamekeeper Watch's son was knocked over, relinquishing his precious list of names, plus hat and mackintosh, whilst another gamekeeper was ignominiously ducked in the ditch.

Displaying commendable calm amidst the chaos, the Inspector sent for reinforcements. Before the horse-drawn Wagonette full of policemen had puffed from the station to the top of Halliwell Road, however, it was recalled as the march formed a stately procession to the summit. With expansive views north to the Lakes, west to the Dee Estuary and south beyond Manchester to the Derbyshire peaks, the vista probably extended far beyond most of these walkers' world, during Victoria's reign. Few thought the adventure would end six months later as Partington and Hutchinson were saddled with the crippling court costs of £600 — today's

equivalent would make a national figure in a libel trial wince... A number continued down to Belmont village, to surprise the locals and, no doubt, delight the landlord of the Black Dog. As the Bolton Journal reported, 'Thus ended a demonstration... many returning to the town, and the remainder besieging the local hostelries... The demand was said to be so great that the wants of the hungry and thirsty ramblers could not be satisfied...' The next Sunday morning, despite inclement weather, (‘miserably wet' ) according to the Chronicle), again attracted huge support, and as the deluge cleared, the steam rising from the walkers rivalled that from the mills!

But the movement's denouement was nigh — the Colonel now entered the fray, counter attacking with devastating effect, isolating and issuing writs by the score,and as promised help failed to materialise, the Bolton Socialist Party slipped quietly away. Back in 1801 the Ainsworth family were already wealthy enough to purchase Smithills Hall and Moor for a princely £21,000. Later, their ownership of the Bleach Works allowed the Colonel to indulge
his love of grouse shooting, leading to the closing off of Smithills Moor.

At the trial the defence called 44 witnesses but still lost the day, despite providing much amusement when William Fletcher, itinerant bricklayer,described his use of Coal Pit Road and stops at Black Jack's, (the moorland cottage of Luke Morris, who sold gingerbread with `free ale’ to subvert the licensing laws). One day, Luke tossed a loaded pistol into the fireplace — demolishing the cottage. So, it was left to Solomon Partington to repeatedly issue protest pamphlets against the Colonel, until the journalist finally retired. 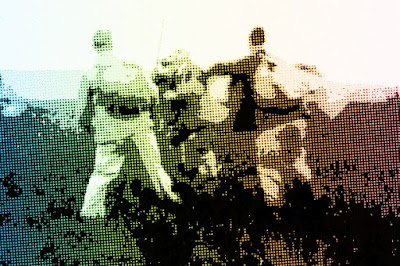 By 1938 the Hall and Moor had passed into the possession of the council — so surely the story would conclude with this infamous track designated as an official Right of Way? Remarkably, it was not until 99 years and nine months after the Mass Trespass that it was officially designated thus as the Council, galvanised into action in June 1996, just made it before the centenary march on the 6th September. Amusingly, at the time of writing it still hasn't appeared on any maps — there's been no Bolton `Rights of Way Officer' since 1984.  So, the 100 years war is finally over... but beware the ghost of the Colonel if you're caught in the clammy mist, lose the track amongst the heather and disturb his grouse.