Where have all the Birds gone? 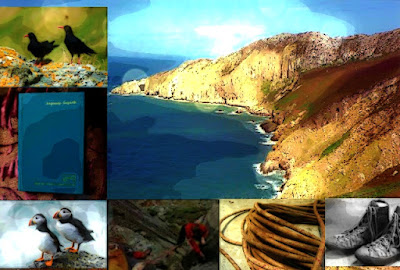 There is no doubt that some people will grin in anticipation of what this article might contain but, unfortunately, what follows is about the feathered, and not the more desirable, variety of bird. Even if the title has misled you to read this far, please carry on as the problems of bird conservation are of importance to every climber who uses sea-cliffs, regardless of the degree of his ornithological interest. Due to the recent huge losses in bird population from oil pollution and other causes, the Nature Conservancy are most concerned that those birds which do return to nest on the sea-cliffs are disturbed as little as possible, by climbers or anyone else. The problem has been outlined in a recent report, produced by the Nature Conservancy in Bangor, dealing mainly with the Anglesey cliffs, which are of high ornithological interest.

At a recent meeting between the Conservancy and the B.M.C. to discuss this report and its implications, it was agreed to publicise the relevant facts as widely as possible, to obtain the cooperation of climbers. In actual fact, the species of birds of importance nest in only a few specific parts of the Holyhead cliffs, mainly in the South Stack area. The main colonies of Auks nest on the two huge buttresses which project from Red Wall; in other words the two buttresses which define the Left-hand Red Wall zawn. Other smaller colonies nest on the prominent horizontal ledges in Mousetrap zawn, between Green Slab and the lighthouse steps. Thus the approaches to the Left-hand Red Wall routes and Mousetrap pass very near to the main colonies and Green Slab, Primevil, Primate and the Mousetrap zawn girdle actually go through the smaller colonies.

The nesting season lasts from the end of February to the end of July and, during this period, the areas mentioned above ought to be avoided as much as possible. None of the routes affected are in fact very popular, with the exception of Mousetrap, and so no great hardship would be felt by climbers voluntarily co-operating in this matter. Mousetrap can still be approached without disturbing any birds by either the low-tide approach from the lighthouse steps or by routing the abseil approach directly into the north side of the zawn instead of on to the top of the buttress. There is no real problem with Red Wall proper, Castell Helen or Yellow Wall. On Gogarth, there are no concentrated colonies of birds, but the broken areas above all the routes often hold nests of Cormorants, Puffin burrows and the nests of other rarer species.

In the case of these less critical areas it is obviously of importance to be careful only when in the near vicinity of isolated birds, particularly when scrambling up the upper parts of the cliff. The majority of climbers will be rather uncertain exactly when and where they constitute a serious disturbance to the more susceptible species. This being so I will try to provide a few notes for guidance, which I hope will be both helpful and interesting. Space does not allow a full description of each species, but any good reference book on birds will give clear illustrations of those concerned. Gulls: There are three species present on the Holyhead cliffs—Herring (or Common), Great Black-backed and Lesser Black-backed gulls. Of these the first is very numerous and of the others there are perhaps 10/20 pairs each. All are capable of looking after themselves, being so bold as to physically attack climbers—but any actual in-jury to a person is rare and almost certainly due to a miscalculation on the part of the bird. 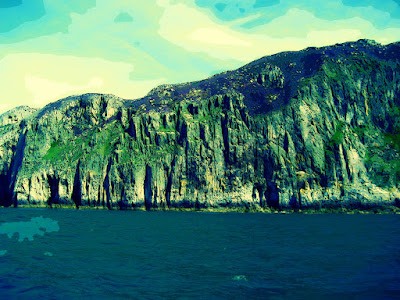 However, the presence of the gull does constitute a real threat to the more timid species, which may leave eggs and young unattended when disturbed and at the mercy of these vicious predators. Great Black-backed gulls have been known to 'take' adult puffins. Cormorants: This group comprises of only two species, the Cormorant itself and its small cousin, the Shag. They are far less numerous than the gull, there being perhaps 20 pairs of each spread over the cliffs. They are basically coastal birds, spending a large proportion of their time sea diving for fish. During the critical stages of incubation they display great tenacity, remaining on the nest whilst climbers bridge round them. The smell, hissing and snake-like contortions of these birds are a discouragement to the most ardent climber.

They require large recesses or ledges for their bulky nests and consequently they often occupy sites that are useful as belay ledges. Some conflict is inevitable here, but it is not the immediate concern of the conservationists. However, due care should be taken when in the vicinity of nests. Auks: So far as the Holyhead cliffs are concerned this family of three birds, the Puffin, Razorbill and Guillemot, are the main problem. The Razorbill and Guillemot resemble a small version of the penguin, whilst the Puffin is smaller still with a highly coloured bill. Auks are oceanic birds which return to the coasts in February to establish colonies and leave in July when the young are fully fledged. They are placid birds with a shy disposition and are thus very susceptible to human interference.

Climbers may in themselves present only a marginal threat to breeding success, but when there is any oil or chemical pollution in the sea these birds die in their thousands. From a conservationist point of view it is essential to have several large colonies in each area to offset these catastrophes and speed recovery. The South Stack cliffs, as described above, are such an area and are second in importance only to the colonies on the Lleyn peninsula. Another factor is the slow breeding rate of Auks. They lay only one egg each year and do not lay another if the first is destroyed or deserted. Apart from the three species described above there are several other types of bird which nest on the Anglesey cliffs in much smaller numbers.

These include the Oyster-catcher, Fulmar, Raven, Kestrel and Rock Dove. Although it is unlikely that any of these birds would nest in an area of climbing activity, care should be taken if any of these birds or their nests are approached. The rock gymnast may either regard the birds as an interesting contribution to the unique atmosphere of sea-cliff climbs, or merely as a bloody nuisance. Whatever our view in these matters, we will recognise that when the interests of man and animal conflict, the animal invariably comes off worst. In conclusion, I would like to emphasise that it is in the interest of every climber using sea-cliffs to take every reasonable precaution to avoid the harassment of birds at all times, and particularly in the breeding season in the areas described.

So far, the problem has only arisen on Anglesey because of the intense climbing activity there over the past few years. Full co-operation from climbers using these cliffs will create a deal of goodwill with the conservationists and will prevent the necessity of more drastic measures being taken. The Nature Conservancy are to carry out population surveys over the next two years, to determine more exactly the effect of rock climbing on the status of each species. Exemplary conduct on our part should ensure that their conclusions will not lead them to press for permanent restrictions on Anglesey or on any other sea-cliffs.