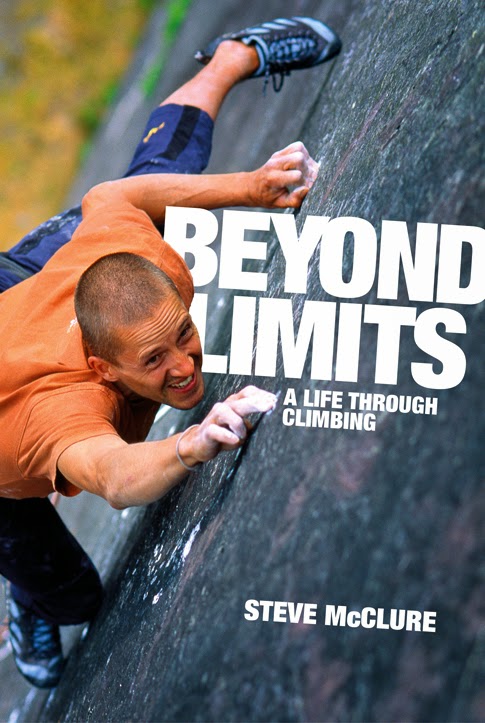 Photo-V-Publishing
There was something about the cover shot and caption which suggested that, as climbing autobiographies go, this wasn’t going to be a Journey After Dawn or Native Stones. " The author, entirely focused and without a hint of fear climbing the Very Big and the Very Small ..etc’. Hmmm..Self aggrandisement, ironic self deprecation or simply the publishers hype slotted in for effect?  At least it sets the reader up for what lies within and that is, a climbing memoir from someone who is firmly rooted in that exclusive club of top end English rock technicians. Those who studied their craft at the feet of Fawcett and Livesey et al, before going on to outstrip them on English and Welsh rock.

Steve’s autobiography begins in the time honoured manner of many north country climbers. Not quite tramping on’t moors wi mother’s washing line and dragging Fred up a slimy green crack but a path nevertheless,well trodden by our friends in the North. He did have one big advantage however,over a lot of climbers who find they have a natural talent in the field. That is, of having outdoor loving, rock climbing parents which has to give you a head start.Typically, Steve progresses apace and his ambition and boldness sees him exploring further and further afield from his north Yorkshire base.

One anecdote which sticks out from these early years is when he climbs a hard route on Cloggy. Setting out late in the day, he and his partner finish in the dark. After taking an age to get down from the top of the cliff they fail to find their rucksacks and decide to walk to Llanberis in the pitch dark and back up to their camp at the Cromlech boulders, still wearing their rock boots and still racked up. Next morning they walk back to Cloggy still in tight rock boots as they had no spare footwear. It brings tears to my eyes just thinking about it! I’m surprised he didn’t end up permanently hobbled like one of those Chinese peasant women in Wild Swans!

Unsurprisingly for someone pushing his limits, Steve’s steep learning curve sees him take a big fall which left him unconscious in a churning  Irish Sea while climbing at Pembroke. The Welsh sea cliffs being the venue for another serious accident when Steve eggs on a punter friend to tackle a route beyond his capabilities with almost fatal consequences. Happily said friend survives and remains a friend of his to this day.

The reader will not be surprised given the books' fairly parochial emphasis, that no one gets benighted on an Alpine face in a storm or falls into a crevasse. Patagonian citadels remain unvanquished and the greater Ranges remain over the hills and far away. Apart from the occasional bus-man’s holiday to warmer  climes, the dank limestone walls of Yorkshire and the beetling cliffs of the Celtic fringes remain the main arenas of activity. In this regard, this can be seen as both the strength and weakness of Steve’s book. A strength in that  it allows the reader to really get a flavour of the physical and mental stresses and attributes required to push the limits on native rock. A weakness in that without being able-as Martin Boysen could do in his recent Vertebrate autobiography- range far and wide across world mountaineering and climbing in all its varied forms, Steve has to keep the focus tight and fixed.

In particular, concentrating a lot of the writing on the technical nuances of a hard route. Describing in the tiniest detail, the moves on routes like Hubble, Overshadow, Batman and Northern Lights. You have to say though, that unless you are one of those climbers who operates in that rarefied stratosphere or are a total anorak who has devoured every article ever written about these rare climbs, then detailing the technical minutiae is interesting for sure, but then I guess that for 99% of those reading the book, you could mash up these passages and no one would by any the wiser. But then again, many would say that if you have climbed some of the hardest routes in the world then you are entitled to describe those experiences in the finest detail.
An interesting philosophical aspect of Steve’s book for me is that is rekindled some musings I had after listening to a classic radio programme about rock climbing in the early 1990’s. Interesting in that it firmly placed modern climbers into two distinct camps. The Classicists and the Romantics or if you prefer, the Cavaliers and the Roundheads. In this regard Steve is very much a modern day Roundhead who appears to echo Ben Moon-or was it Jerry Moffat’s ?- statement that ‘I’m not climbing to be in nice places, I’m climbing for the moves man!’ In the same programme, Ed Drummond-no slouch he of course on the rock face but very much with the romantics- lamented modern climbers ‘juvenile pursuit of numbers’.

In this, Steve appears to recognise those sentiments when in the latter stages of the book he finds himself wondering out loud whether he is still enjoying climbing as he once did or had it become a rather mechanical process with the sole aim of ratcheting up the numbers to keep the sponsors happy.  In this regard though, Steve still dutifully sings the praises of Fat Face, Marmot , 5-10 and the other enterprises who have used him to promote their products. As a pro climber with a wife and kids to support these days however, needs must if you operate at the cutting edge. A climber of Steve's calibre has a limited time at the top. As Paul Simon says in Boy in a Bubble- ‘Every generation throws a hero up the pop charts’. Steve’s autobiography is written from the perspective of someone who has been ‘thrown up the pop charts’ but in 2015, is no longer the new kid on the block.

Rather an elder statesman in his mid forties. Steve’s generation placed between the 70’s and 80’s Godfather’s of Rock-Jockery and the current bright young things who grace the glossies are-or should we now say, were?- a supremely talented golden generation of rock athletes with Steve McClure very much at the heart of this select group. Beyond Limits is an honest and revealing work from the perspective of a supreme rock technician. It might be lacking in the romance and poetry which singles out the classic climbing book, but I’m sure even ‘Cavaliers’ will learn a great deal and find a lot to admire in Beyond Limits!

Published and available direct from Vertebrate