John Porter's- One Day as a Tiger- Review 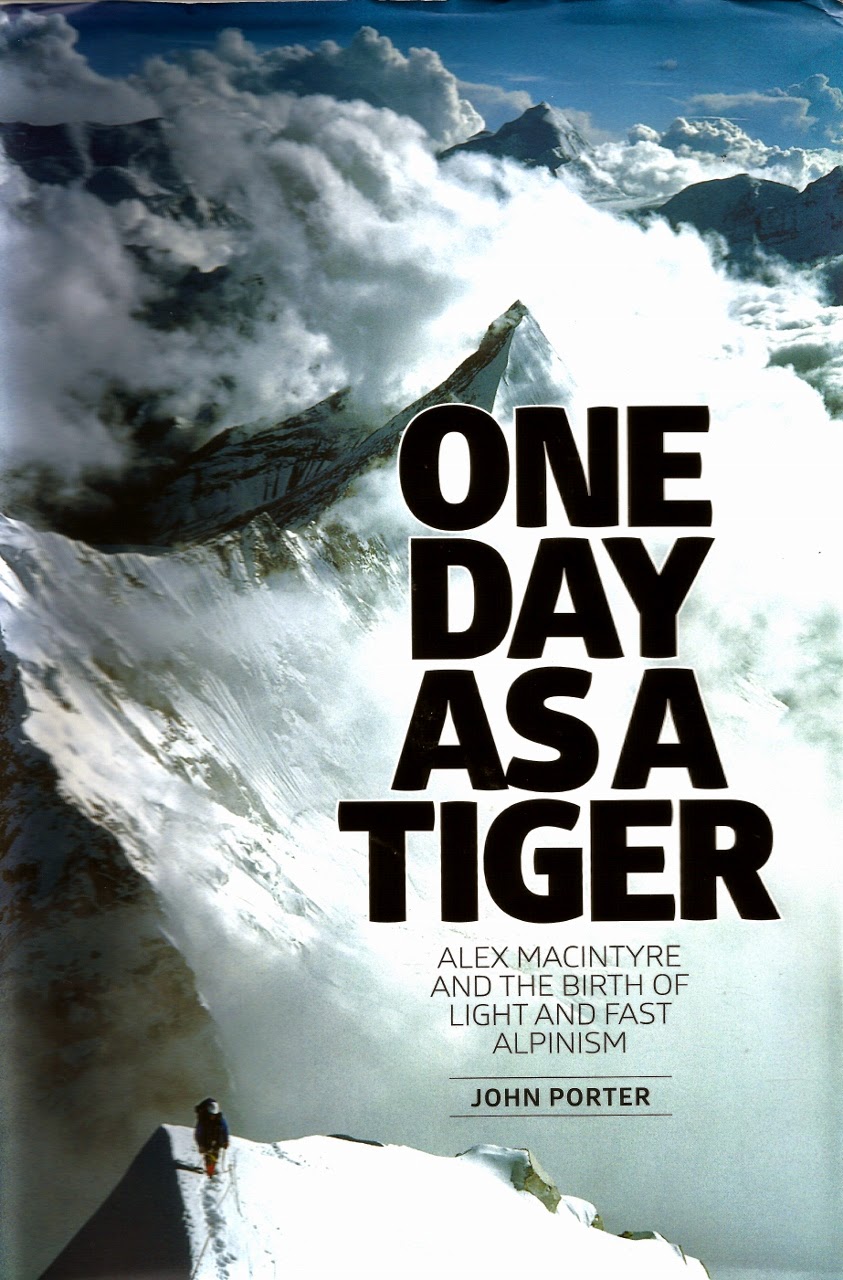 John Porter’s One Day as a Tiger-(Alex Macintyre and the birth of lightweight and fast Alpinism) is an absorbing literary hybrid that is part biography and part autobiography. Ostensibly, the reader will get the impression that the book revolves around the eponymous doomed mountaineer whose star burned bright in climbing’s firmament for less than a decade before he was killed, aged just twenty eight on Annapurna. However this is just as much John Porter’s story; and why not... for the author’s achievements stand up in their own right and the Massachusetts  born, Lakeland dwelling mountaineer has his own fascinating tale to tell and that tale is skilfully woven into the life and times of his subject.

John Porter was Alex Macintyres’s friend and mountain partner for almost as long as Alex was active. From his early days with the infamous Leeds University Mountaineering Club until that final fatal day in 1982. John watched his friend graduate from the confident if limited crag rat, to the international respected mountaineer whose light weight ethic has been taken to the limit in modern times, by climbers like Ueli Steck.

‘Dirty Alex’ as he was known to his friends-which reflected his unkempt appearance and chaotic lifestyle rather than any unsavoury sexual predilections!- began his climbing life in the time honoured manner of his contemporaries. By working his way through the UK rock and ice classics before taking on the Alpine biggies. Porter describes Alex’s early days as unremarkable in that his talents at the time remained largely hidden. A solid if unspectacular performer who was happy enough to let better climbers take the lead on technical ground while he observed and developed his craft.
However, it wasn’t long before he had accelerated past most of these partners, bringing a fearlessness and almost fanatical drive to his armoury of technical skills. It was time to apply this potent force and passion to the challenges of the greater ranges of the Himalayas and the south American giants.

His achievements in this arena were extraordinary and his application of lightweight ‘hit and run’ Alpine techniques were revolutionary in an age when Himalayan climbing was defined by the vast scale of the enterprises. Throwing vast armies of mountaineers at a goal and almost battering the target into submission through weight of numbers, equipment and time. This was an anathema to Alex and his revolutionary approach harvested a rich reward . With equally committed partners he made eye-catching  Alpine-style first ascents and first attempts on, Changabang, Shishapangma and Makalu and with the author, took on some hair raising challenges in the Andes.

In train with his growing catalogue of achievements came a role with the BMC alongside Denis Gray. In many ways, his role as a climbing bureaucrat was in sharp contrast to his image as a mountaineering free spirit and trail blazer. Notwithstanding this apparent contradiction, he appears to have applied himself to the role with the same single mindedness and commitment as he applied to his mountain activities. At the same time, he followed on in Don Whillans’ footsteps and began to act as equipment consultant and designer for companies like UK based Karrimor ,who at the time was a respected player in the mountaineering equipment field, prior to it becoming just another arm of the Mike Ashley/Sports Direct empire and the importer of Chinese made goods which the company has evolved into today.

The ‘Alex Macintyre rucsack’ was amongst the more popular items he designed and which went into commercial production ( currently on my eBay watch out for list!) but seemingly as rare these days as hen’s teeth. Try looking for an image or info on Google.

As Alex entered the final period of his short life, friends including the author, had noticed a change in his previously determined but principled approach to climbing. His latter-day excursions into the mountains were marked by a ruthlessness and ambition which had no place for journeymen or 'tourists'. To say he didn’t suffer fools gladly would be an understatement. He put his bold climbing style- where he would often take on potentially life threatening sections on gnarly ground with non existent  protection- down to an ability to detach himself from reality and climb within a protective mind bubble. He also however, believed he could achieve astral projection and leave his body when he was in the Himalayas, to be with his partner in the Lakes. Not a gift you imagine someone like Don Whillans boasting about!

This otherworldlyness allied to a ruthlessness in his latter day quests is most clearly defined  in a 1981 expedition he undertook to Shisha Pangma. An expedition led by Doug Scott. This ill tempered affair and the fractious nature of the campaign can be quite squarely attributed to Alex’s’ ambition and ego. As Doug Scott attempted to keep his team focused and united, Alex put personal ambition before anything else and appears to have offered nothing but contempt for a leader who was doing his best to accommodate everyone; not least the weaker members of the team. Alex was quite clear, he wanted to cut loose the weaker team members who were perceived as holding himself and partner Roger Baxter-Jones, back.  In this as in every campaign, success was everything. More so it would appear, than respecting and accommodating those climbers who were not in Alex’s league when it came to ability, drive and stamina.

It was during this period that he had announced to the author that ‘I want to be one of the world’s all time great mountaineers’. In this regard critics will say that to achieve that ambition a mountaineer needs to have more than drive, ambition and technical ability in their locker. Respect for others and respect for the environment have to come into the equation. There appears to be little doubt that Alex Macintyre-as one of an elite core of top end mountaineers- was single minded to the extent that his hit list of mountaineering targets became a holy grail to the detriment of relationships.

If he had lived through to his 60th birthday in 2014, would he have made a great mountain leader? John Porter’s book suggests not, as he was certainly no Shackleton when it came to accommodating and respecting others. Did he respect the environment within which he lost his life? There is no doubt that he did although like all mountaineers at the sharp end, he was prepared to take risks and often though, risks which appeared disproportionately pointless and unnecessarily dangerous in relation to the end goal.

He was killed after being struck on the head by a rock on terrain which was notoriously loose and prone to rockfall, but then again, acting as a skittle in a bowling alley is not a unique role that Alex Macintyre played when pushing the envelope in the Himalayas. I’m left pondering what he would be doing today if he had lived? Would he have become a Bonington or Brown; a respected elder statesman within the community or would his ego and ambition mark him out as an outsider. I’ve already alluded to this above but I would guess from John Porter’s insider account that he certainly would have been respected but perhaps without becoming a popular personality within the community. Certainly you couldn't see him evolving into an avuncular Chris Bonington figure.

John Porter’s Banff winning  book, written from his unique perspective will, I’m sure, promote speculation and inspire debate  around Alex Macintyres’ place in the pantheon of mountaineering greats. At least his comment ‘I don’t want to play this game just to have a rucksack named after me’ hasn’t come to pass. His achievements will always speak for themselves and his influence continues to be recognized throughout the mountaineering world today.