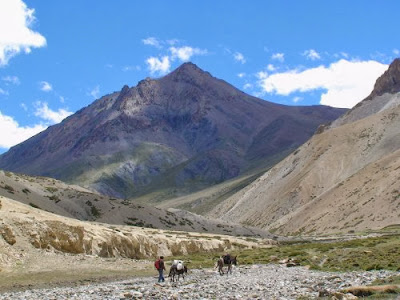 I wasn’t familiar with Gerry Galligan before I’d read this book but I gather the author is a well respected member of the Irish mountaineering community.  A community which although smaller than most European climbing constituencies, has nevertheless provided a healthy contingent of activists who have established some important ascents in mountaineering history. At first glance, Climbing Ramabang promised to be an intriguing mix of mountain adventure and travelogue. Tackling a Himalayan giant and then ‘doing a Whillans’ and riding home across Asia and Europe on a motor bike.... Sounds great!  However, things are not always as they first appear. You see, not being an anorak when it comes to being conversant with the league table of Himalayan mountains, I had presumed that Ramabang must be a major peak?  If not in the 8000 metre group then close. It turned out that the mountain was in fact an unclimbed and unnamed 6135 peak in the in the  Spiti District of Imachal Pradesh in Northern India.

Gerry and his cohorts, Paul Mitchell, Craig Scarlett and Darach Ó Murchú had chosen the peak for its relative ease of access and suitability for a small team looking to make a first ascent. In the event, the actual ascent of the mountain passes off very early in the book without major incident. No one gets avalanched or screams down an crevasse; no one has to effect an ice axe brake just inches away from a 1000’ drop. No one takes a big fall onto a wobbly blade. In fact, whether through classic understatement or reality, Gerry makes the AD graded climb sound like a Sunday stroll up Catbells! 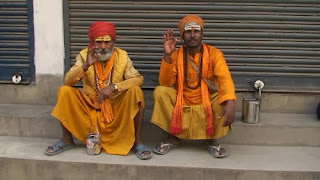 As mountaineering tradition dictates, the leader of the team which makes the first ascent can name the mountain but Gerry carefully avoids offending local sensibilities by choosing a name which is culturally compatible. ‘Ramabang’. Named after the Hindu God Rama and bang meaning ‘the place of’. With the mountain out of the way, the team disperse and Gerry pursues his idea of getting hold of a classic Royal Enfield motor bike (still made in India) and riding home. A nice idea except  that Indian bureaucracy kills the prospect stone dead. With time on his hands and now flying solo, Gerry decides another first ascent is in order and takes off to Ladakh where he intends to hire a muleteer who will carry his equipment up an as yet unknown base camp, from where he will throw himself at another minor unclimbed peak. That’s not to use ‘minor’ in a pejorative way of course. We’re talking about an individual climbing an unclimbed 5000’+ Himalayan peak without climbing support....fair play to the man.

I was amused that ‘right on’ Gerry spends a few pages moaning about the stubborn donkey herder who wouldn’t budge from his £15 a day hire charge. And they say the Scots and Yorkshire folk are tight! As with Ramabang, Konchock passes off without incident-a debilitating dose of the galloping guts apart-and then it’s home by public transport- bus, train and thumb. If this all sounds a bit mundane and not typical of your average mountaineering book then take heart.  Climbing Ramabang escapes from the clichéd world of mountain literature and succeeds as a extremely well observed travelogue. A  work created by someone who has a genuine interest and curiosity in the people he encounters along the way,and skilfully dissects the cultural complexities which have moulded their characters. 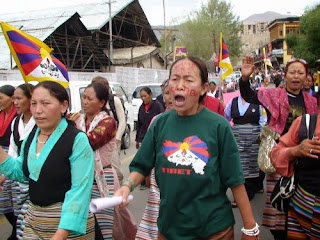 As someone of strong opinions and with a finely tuned bullshit antenna, Gerry’s travels uncover a curious world of stoned shamans and Pakistani Lady-boys; Islamic revolutionary guards and Israeli hippies.  Despite his respect for the different cultures and religions he encounters, he is not afraid to abandon political correctness and pick up and highlight any negative features within these cultures and belief systems, whether he is writing about Buddhism, Islam, Hinduism or Sikhism. In fact, he spends an entire chapter dealing with Chinese genocide in Tibet and his conclusions will chime with anyone who is saddened and appalled by China’s violent subjugation of a once proud and free nation. He also looks under the surface of day to day life in Iran and concludes that despite the authoritarianism of the Islamic state, life here is a lot better for the average citizen than in other Islamic states- notably Pakistan. In fact he compares life here favorably with that of its arch enemy the USA, which will surprise a lot of people. 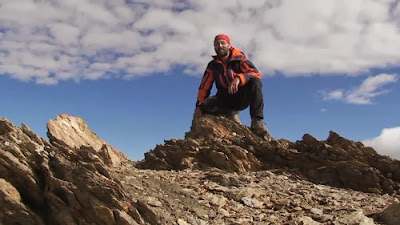 Gerry on the summit of Konchok

In all these areas, Gerry doesn’t shirk from applying his left of centre perspective and offers some really fascinating potted historical points of reference for those who might not be familiar with the recent history of troubled places like Iran or Tibet.Throughout his journey, Gerry finds himself courted, hosted and entertained by a rich and diverse range of characters. Most of whom are generous to a fault despite often living in great poverty, and  his hosts are inevitably as fascinated with the genial Irishman as he is with them.


Climbing Ramabang is a fascinating and illuminating journey which explores beneath the tourist facade, and paints a vivid picture of day to day life for ordinary people living in extraordinary places. Proving once again that the road less travelled is inevitably the most interesting way to go.