Anniversaries: Sea Stacks and new routes on the Point of Stoer 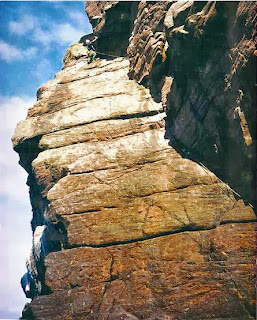 Paul on the first ascent of Haramosh:

For our wedding anniversaries I try to give my wife, who doesn't climb much, a present of a memorable adventure. I thought The Old Man of Stoer in the North West of Scotland would provide it; a VS/HVS route, exposure, abseils, a swim to the base, what more could she ask? On the day, she won the toss for the swim lowering herself into the icy sea with the rope end tied to her waist. I rigged the Tyrolean and came over dry and fully clad with the rest of the climbing gear as she muttered darkly. She had a few grip­ping moments climbing and coming down the airy abseils, and congratulated herself on avoid­ing the fulmar chicks occupying the ledges. These sea birds with attitude cover you with pungent puke if you get too close — not difficult on a sea cliff, since their range is easily four feet. We had a perfect day ,after all, the attraction of these wonderfully situated climbs is not the grade but the whole atmosphere.


Safely back at the top of the mainland cliff Marea said how much she'd enjoyed it. Was this the moment to tell her what I'd spotted as we sat in the sunshine atop the Old Man. For clearly visible half a mile north were two very promi­nent lines on a striking piece of cliff at the actual Point of Stoer. The new Northern Highlands guidebook made no mention of any climbs in the area other than on the Old Man, so I inno­cently suggested a picnic for the next day.


As we set off she looked suspiciously at my enormous pack but I said I had some gear to maybe shunt something while she was painting. Marea settled down with her watercolours and I scrambled along the narrow point to the top of the very large corner I had seen. With perfect, clean rock it looked just too good to be true. I tied off my 180ft rope and threw it down the cliff, the end whistling out of sight towards the sea.

Abseiling down the corner I soon realised after kicking off a few loose blocks that indeed it had not been climbed and surprisingly looked fairly easy. One large block I inadvertently knocked off ricocheted down my rope, but checking quickly I couldn't see any damage. (A week or so later back in Borrowdale, I was do­ing a free abseil on a single strand down a possi­ble new route on Upper Falcon Crag when right before my eyes the sheath parted and out spurted the innards of the rope. I quickly clamped an ascender above the tear and then tied an over­hand knot around it before I could continue—very upset at losing my best rope.) 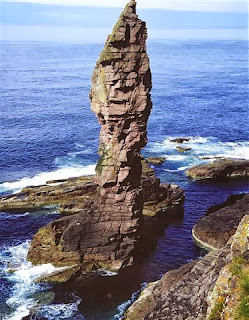 The Old Man of Stoer

I carried on descending with the rope fortu­nately reaching a platform about 160ft down, just above the high tide mark. I clipped on the Shunt and marvelled as I climbed back up this superb line, at about Severe standard. I enthused over it to Marea and since I'd luckily brought her shoes and harness in the pack it wasn't too long before I persuaded her to abseil down the single fixed rope to the platform. Using our spare 9mm rope we climbed the two pitch route with much en­joyment. Although to our right was a very large bird colony we met no nesting birds on this climb, which we called simply The Great Comer.

About 40ft to its left was the other corner line I had spotted from the Old Man but inspec­tion from above was difficult because of the over­hangs in that area of the cliff. I got Marea down to the platform again so that I could attempt this route on sight. It looked quite spectacular and a lot more difficult but I convinced her if it proved too hard for her, she could jumar back up the abseil rope. I had to descend slightly to reach the foot of the corner, a little below the high water mark. Once in the corner the climb­ing was much easier than it appeared and a wonderful Hard Severe. One 11Oft pitch brought me to a flat edge under a roof right on the prow of the Point of Stoer.

Marea soon joined me, pleasantly surprised by the reasonably easy grade. A few feet above the belay ledge was a perfect roof split by a head sized off width crack. Climbing this crack would have made the route much more difficult but it just looked too tempting. The alternative was a very exposed, scary looking traverse under the roof and above another roof into territory with no obvious outcome. After a couple of attempts at the crack, where both times my helmet be­came jammed, I realised a slip after cutting loose through the roof could result in me hanging in space by my helmet — not a pretty sight. Now I would have to make the exposed traverse right which once again proved easier than it looked. 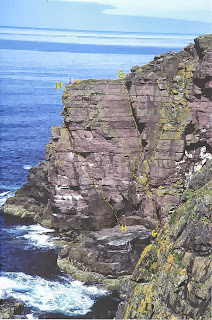 The lines of Haramosh and The Great Corner

A little groove appeared to the right of the roof and enabled me to traverse left until I was back at the top of the crack and directly above Marea. So far the route had been free of any puking fulmars. Now ten feet from the top sat a very fat chick and by the look on his face, he was fully loaded... On the Old Man of Hoy I'd encountered both adult birds and chicks defending themselves with an apparent inexhaustible supply so I devel­oped the technique of waggling my foot just out of range enticing them to discharge and nipping past in the few gulping seconds they take to re­load. Fortunately this one was in a good position for the waggle technique. I dodged as two good-sized bursts of half-digested fish went whizzing down the crack to score a direct hit on Marea's helmet and brand new wind parka.

She was not a happy lady.The birds once overtaken show no further signs of distress, and generally sea birds act unfazed by our presence. I've seen puffins hap­pily feeding sand eels to their young as I was belayed two feet away. My timing was perfect and I pulled out unscathed on to the top of this great little route. The final pitch, though very exposed, proved no more than mild VS — a truly perfect outcome to a perfect day. I held my nose and gave Marea a celebration hug. We had been very fortunate to find two three star routes of pure enjoyment in a perfect setting and I would not swap the experience of climbing these two gems for the World's hardest E9 bolt ladder.


The next day we headed north to the sea cliffs of Sheigra near Cape Wrath. Here I shunted some excellent routes put up by my old Alpha Club friend, Paul Nunn, who began exploring in this area when I was living in the US. I had missed this early scene but noticed in the new guide that Paul was still exploring these areas, and re­solved to tell him how great I found them, and if ever he needed a partner I'd be really keen.

Ar­riving home we found that two days before our ascents on the Point of Stoer, Paul had been killed in the Karakoram on the way down from the first ascent of a mountain called Haramosh 11. Long ago in 1965 he and I shared some good times new routeing on Eagle Crag in Borrowdale and one of these routes he named The Sprogg in honour of my son Andrew, born two days prior to the ascent. In return, I thought it a fitting trib­ute to name our beautifully situated climb on the Point of Stoer Haramosh. Paul's favourite retreat was the North West of Scotland and the Stoer Peninsula embodies all the mystic beauty he loved so well. 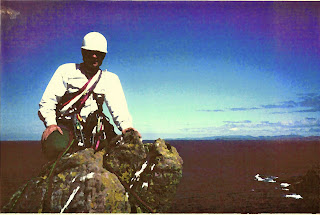