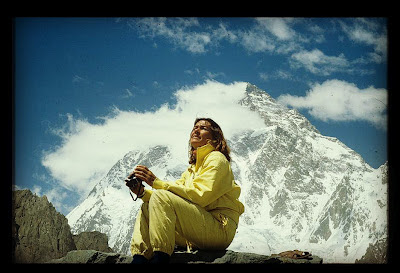 
And what rough beast,its hour come round at last, Slouches towards Bethlehem to be born?


When Bernadette McDonald's  Freedom Climbers first came to my attention, I confess I had no idea what the book was about? At the back of my mind I had it in my head that perhaps it was about some Bill Murray-esque character...the Liverpool born/Scottish climber not the Ghostbuster.... escaping from a war time concentration camp and making good  his escape across a remote mountain range; guided by the stars and wearing boots fashioned out of reindeer pelt. Rather like that Peter Weir movie, 'The way home' . I soon discovered of course that Bernadette's book was an in depth history of post war Polish mountaineering concentrating on some of the sports central figures.

Hmmmm...a book about climbers living in a communist state called Freedom Climbers. I can imagine the Canadian writer might have lifted that title from the back of an ideas envelope upon which..'scaling the iron curtain' and 'escape from the axis of evil' was also scribbled! Not that I'm an unreconstructed Stalinist you understand, but I find the title a wee bit..well...clunky! However, I'm delighted to say that clunky title notwithstanding, what lies within is pure gold ! The author has produced a diligently researched and authoritative account of a nation's mountaineering history which is engrossing and inspiring.

The opening chapters offer an historical perspective of a nation which in the last century has been continually dealt a bad hand by the Gods. No more so than when Poland found itself squeezed between the Nazis and Stalin's Soviet Union in that catastrophic decade....1940's. A period when 'a blood dimmed tide is loosed and everywhere the ceremony of innocence is drowned'.
From those blood soaked and tangled roots a remarkable story of mountaineering achievement emerges but ultimately, it is achievement born at a remarkably heavy cost. By the time Polish mountaineering's golden age between the early 1970's through until the 1990's has ended, eighty per cent of its leading climbers are dead. Has any climbing nation ever paid such a heavy price for mountaineering success ? I rather doubt it.

Freedom Climbers brings into focus dozens of Polish mountaineers,many of whom will be unfamiliar to parochial English and American readers. However, three central figures emerge from the impressive cast list from which author not surprisingly, has concentrated her main focus on. Wanda Rutkiewicz, Jerzy 'Jurek' Kukuczka and Voytek 'Wojciech' Kurtyka, all born in the maelstrom of the 1940's and who blazed their own outrageously ambitious trails across the greater ranges until the former two climbers predictably paid the ultimate price.

Certainly there is so much to admire in characters like Rutkiewicz and Kukuczka but little to like. Driven as they were by pure selfish,naked ambition and willing to use partners as a means to an end even if it meant putting the lives of these friends and acquaintances on the line. Indeed,it's not mere speculation to suggest that several partners of Wanda and Jerzy  DID pay with their lives when their obsessively driven leaders pushed the envelope too far when circumstances suggested caution would be the better part of valor.
Wanda Rutkiewicz in particular comes over as a particularly sad, tormented soul. Brave, gifted and quixotic but when her life ended on Kanchenjunga, she appeared to have moved beyond the realms of reason and entered a twilight zone which existed between dreams and responsibility.

A curious UK/Polish socio/cultural parallel which emerges in the book is the similarity between the 1980's British 'UB-40' climber-a climber who lived on welfare benefits and/or who worked in short bursts and then went off on extended climbing trips-and the Polish 'stack climbers'. Leading Polish climbers who worked painting industrial towers in places like Katowice to earn enough to fund trips to the greater ranges. Certainly it would be hard in places like Kathmandu in the 70's and 80's to pick out the hairy bearded Brit from the hairy bearded Pole...Wanda Rutkiewicz excepted!

Curiously for a people living under the dead hand of an authoritarian regime ,the Polish mountaineers emerge as a remarkable resourceful and enterprising constituency. Operating a thriving import/export trade between their economically ravaged European home and the Eastern destinations to which they travelled.  Indeed,in a country were wages were poor and opportunities restricted,many of the leading climbers ended up relatively well off through their unique adoption of Western market economic dynamics!

In the early 1980's legendary radical Polish filmmaker Andrzej Wajda made what would become a hugely influential film 'Man of Iron' based upon the birth of the Solidarity trade union movement in Poland. Freedom Climbers suggests that anyone writing the definitive biography of a figure like Jerzy Kurtyka could do worse than borrow Wajda's film title. These Men-and women- of iron were forged in the fiery foundries of Warsaw, Gdansk and Katowice and tempered in the far eastern greater ranges. It is to Bernadette McDonald's enormous credit that she has brought alive this remarkable chapter in world mountaineering history and captured the unique burning qualities of a quite extraordinary collection of gifted individuals.

Given the aforementioned grim statistic which highlighted the astonishing price leading Polish mountaineers were willing to pay to achieve their goals, Freedom Climbers unequivocally suggests that mountaineers like  Wanda Rutkiewicz lived their lives in the firm belief that is was 'better to burn out than fade away'. For three decades, the achievements of Polish mountaineers blazed like a dark star over the international mountaineering firmament . 'Triumph and tragedy'...that hoary old mountaineering cliche, never more appropriate.Bernadette McDonald succeeds in bringing together all the elements of what is an epic tale and presenting them in a manner which is fascinating, illuminating and coherent. A fine achievement.