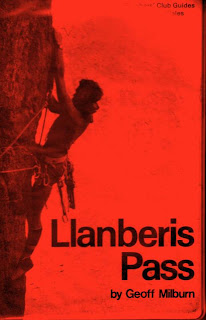 I had finally found something that I could do well. Something that I could do better than the soccer, cricket and rugby players because when it came to team sports I was called ‘A Spastic’. Soccer, tennis and rugby balls confounded me and the chasing of them seemed very pointless.
And then suddenly, on an outdoor pursuits course in a wet quarry at Vaynor in South Wales on a soggy summer day I climbed 40’ of damp limestone in a PVC anorak and over trousers and suddenly found the first physical thing that I could do  half well. And the monochrome photos of young men in crazy situations miles above blurred ground suddenly became places where perhaps I could be better than all of the other boys in my bullying grammar school.

Later in the course several of us decided to choose rock climbing as our special interest and we ended up camping at The Gower. Scavenger became the pinnacle of our achievement and the grade Very Severe rang pealing bells in our egos. We were seduced by the adult sophistication and brilliance of our instructors and the impish ribbing that they offered us. Suddenly we were good at something and they even appreciated us for it.


Although we had little understanding of the depth of literary and social culture that even by the seventies had grown around climbing and even though we were living in Oxford and there was no decent rock for seventy miles there were some practice climbing locations around the city. Scouring the city public library reference sections we found guides to ‘The Horspath Horror’ and an enlightened games master allowed us to cycle out there and practice climb during PE lessons. We developed remarkable finger strength and tenacity.
Several were invited invited to an ‘Advanced’ climbing course as an extension to our adventure course and we climbed at Sennen and Bosigran in Cornwall and along the way we learnt that our outdoor pursuits instructors were famous; Colin Mortlock was the Centre Director and Jim Perrin was the main climbing instructor. Suddenly we were rubbing shoulders with celebrities and climbing royalty. Mortlock’s philosophy on outdoor education was that in order for it to ‘work’ we had to experience an adventure, a place outside the comfort zone where the senses were heightened and the individual began to understand fear and enjoy the sensation of new experiences.

He told us about his ideas and philosophies and in the ‘try anything’ sixties and seventies we bought it all.Our dinner money became Moac nuts and Helvelyn boots, nylon 3 strand climbing ropes and hemp waistlines. The Henderson Geography Prize became guidebooks to Tremadoc and Llanberis. We pooled our money and shared petrol cash or hitch hiked to North Wales for weekends or weeks. Knowing the great Jim Perrin became a passport to the Padarn Lake Hotel and the Climbers Club Hut in The Pass. Our meager dinner money graduated to college grants and gradually we came to know in passing, Joe Brown, Mo Antoine, Roland Edwards, Breda Arkless, Al Harris, Denny Moorhouse and many of the extended Llanberis set of the seventies 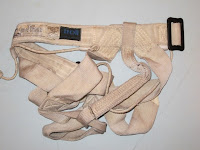 Naturally, our college courses were located in North Wales or Sheffield and we became local along with all of the benefits and failings of a local; walking down to Cloggy after an illegal ride up Snowdon on the early morning hotel supply train, getting ‘bedayed’ on climbs after trying night ascents, winter ascents in The Carnneddu  and Cwn Silyn. There were the inevitable deaths of dear and close friends who pushed too hard or too stupidly. We climbed as hard as we could, we climbed a few new routes, we idolized Crewey and Livesey and only climbed a couple of grades softer. We lived the egg fights in Al Harrises’ Greasy Spoon and we watched in pure lust from the sidelines as the local Padarn Lake climbers girlfriend’s bums twitched as they played darts. We learnt how to roll cigarettes halfway up a route with just one hand. We had to, it was a skill absolutely essential to local acceptance.

Snowdonia was all winding B roads, wind bent oak trees, wet sheep and dry stone walls.  There were the odd remnants of the past, The Douglas Arms charged your drinks in Pounds Shillings and Pence, there was a strange little tea shack just past Ogwen Cottage that served boiling tea to you as you stood in the slashing rain, the Halfway Café on the track up to Cloggy served the most amazing lemonade that I have never tasted the like of since, there was ‘The Captain’ who stood on the bridge at Brynrefail in a sailing officers cap and black waterproof mac saluting all of the traffic that passed. The climber’s barn in Tremadoc was filled with straw and old tables to cook on, the barn up road contained three rusty Austin Seven’s rotting away in the damp. The pub in Nant Peris sold mild for 23 pence a pint and we played Pong once a night on the video game because that was all we could afford. 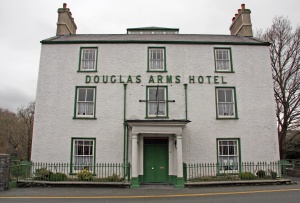 Technology arrived in the form of 9mm twin ropes, superb Clog krabs and micro Chouinard wires but the climbing was all on sight leads and no resting on runners. Guide books fitted neatly in the back pocket of a pair of  Levis and we stuck leather onto the sides of our EB’s to make them last longer. Someone created a Snowdonia friction boot called Gollies, they were bright blue but we never bought them, there weren’t as good as EB’s and in any case, they dyed your feet bright blue if you bog trotted in them.The waste tips of Llanberis faded into the deep blue haze on late summer afternoons and Centotaph Corner always looked down at us and asked the question ‘Are you still good enough?’ Decades have passed, the sport has changed; super athletes climb outrageous overhangs, everyone uses chalk and climbs E4, everyone rests on runners, you have to get used to falling off because you will and you can, but: The mossy smell of climbing ropes still evokes the sensation and rememberance of great days sitting high on the cliff and watching the matchbox sized cars crawl down the road below us as does that sensation as you pull the rope drag over the top and look out a decent belay.

Perhaps the only thing that is still missing is a mangled gold wrap of Golden Virginia, a crushed box of Swan Vestas and a bent packet of Rizlas (with the top flap torn off!)  Our ongoing search for eternal life does perhaps demand a few small sacrifices