Portrait of the artist as an old man: William Heaton Cooper 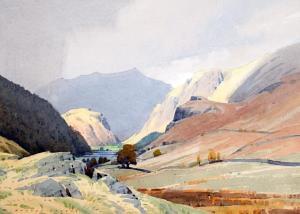 A buzzard drifted over the roof of the Studio of W. Heaton Cooper as I walked down the lane from the Youth Hostel to call on him. It was early evening, a fortnight after Easter, and it would be light late. The Studio is in the centre of Grasmere, facing the village green, and its gallery is visited by thousands of people each year who buy paintings, prints and cards with those familiar tones of colour that together make a distinctive vision of the Lakeland landscape. It is W. Heaton Cooper's vision of the Lake District that hangs in homes across the nation and across the world. It was W. Heaton Cooper's vision of the crags of the Lakes by which I first learned to read them as a young climber, from his sketches in the little brown guidebooks first edited by Harry Kelly in 1935.

In fact, if you buy a guidebook for Pillar in 1988 it contains crag drawings made over 50 years ago. Only with the series of FRCC guides currently in progress have Heaton Cooper's portraits of the crags given way to the work of younger artists. These days they have to carry so many routes that they are referred to as 'crag diagrams.' It was the story of the first guidebook crag sketches that I was curious about. But when I came away from that house a little later, I had a sense of having heard not just history recalled, but of fresh discoveries recently made.
Opening the door of the house he had had built alongside the Studio in 1938, there stood a genial 84 year-old, straight and brown with fitness, smiling and firm-handed with a warm grasp of life.

"You'd better sit in the throne whilst I take care of the coffee", he said, pointing me towards his newish leather armchair. While he poured the kettle I asked him straightaway about the guidebook sketches. Had they been a special commission?
"Yes, out of the blue Harry Kelly asked me to do them for the series. His feeling was that photographs didn't really give a 3D effect. So I had to invent the idiom, catching the whole crag with the greatest economy of line."

"Had there been any models of guidebook crag sketches to draw from?" I wondered.
"I hadn't seen any, certainly, but my training in drawing the human form made it easier. Art School training had certainly given me economic drawing skills. Choosing the position from which to draw the crags was a problem, though — to draw them from below, as a climber would see them using the guidebook, or from further away? I decided that further away was best, at right angles to the rock face. Of course, some crags were easier than others."
"Did you ever have to cheat and draw something which could not actually be seen all at once?"
"The only place where I did that was for Pillar's South Face of High Man when I had to look round the corner and then draw from memory. 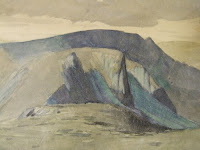 Harry Kelly was very witty about that when he saw that I'd drawn it as though Pisgah wasn't there in the way: 'A perfectly respectable bit of mountain appears to have been moved by Heaton Cooper!'
I climbed with the guidebook writers to get to know the lines of the routes, not all of them of course - some climbs were too stiff for me. Then I did a pencil drawing which was reproduced by photogravure. In a separate printing the black ink routes which we marked on transparencies were done by letterpress printing, off metal, to give a 3D effect. Later reprints of the guides tried to economise by doing them both in one printing, the result being completely useless.
I was surprised, when they were published, at the response to the aesthetics of the drawings. I'd thought of themas merely functional diagrams. I didn't see them as part of my work. I just gave them to the guidebook writers, or if people wanted to pay for them I'd say 12.50 ought to cover it.' Sid Cross has rather cornered the market in them now."

Talk turned to Lining Crag in Borrowdale below which I had camped last year and discovered Heaton's routes on what he called in his autobiography, Mountain Painter, an 'insignificant piece of rock that no-one had bothered about.' How had he first come across it?
"For me,. the painting always came first. I had been painting in Langstrath one day in 1934 and I walked back down to Eagle Crag to have a look at it. Further up Greenup Gill in the evening I came across what I realised was a fine little crag. I soloed Greenup Arete that evening for fun. I liked the texture of the rock which seemed like Gimmer. I took Jim Cameron back two years later and we did Evening Wall. We just did these climbs for fun, you know, and then later Jim Cameron wrote them up."

"A rather different spirit from that of today?" I suggested.
"Oh yes, we didn't descend, for example, by an easy way off, or abseil, in our day. We climbed down the same or another climb. That's why lead climbers in our day did not fall. They didn't climb what they couldn't reverse. I think the art of climbing down is needed now, don't you, in world leaders for example? But I liked the last line of the poem you sent me about Evening Wall and the painter, `In the evening of life amongst the crags.' "

"I hope you weren't offended by that."
"Why should I be? I'm well past the evening. It must be nearly midnight. I can't live for ever!" 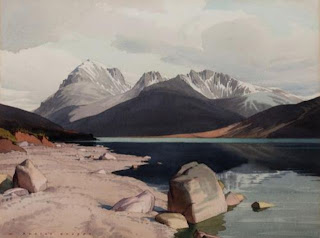 'Well you certainly seem joyously full of life to me... "Actually I suffer from terrible depressions and I have just come out of a year's depression. This Easter weekend has been a personal renewal for me. I am painting every day. I get up at six o'clock, look at the weather, look at the glass and decide where to go today. The marvellous thing about the Lakes is that it's very small. You can get anywhere to paint and be back for evening. This morning I walked up Easedale and found a subject. Tomorrow, if it's fine, I shall go out with a sheet of half-imperial sized paper on a board, with an easel, and do a very detailed drawing in pencil or biro. Then I shall come back to the Studio and Work from memory.

This last year, when I've not been able to go up any height I've learned that now I can trust my memory. Memory stores the colours, tones and the effects of light because it all goes deep enough to stay in the subconscious. Form is the intellectual objective content which I have recorded in the sketchbooks. These days I'm going back to the sketchbooks more and more. The result is that there's more of me in the painting than a copy made on the spot. I was glad to be free of those guidebook crag copies."
I mentioned that the paintings of his that I prefer are those in which there is some dynamic force at work, a storm about to break, or a movement of light. These seem to me to be more emotionally expressive.
"That's because they're from here.' (He taps an 84-year-old heart.) "It's taken me all these years to learn what's important."
How, I wondered, would he describe his own style?
"I always hoped I would never get into a style. I don't like the idea of trying to fit Nature into a style. Every painting ought to be a new adventure, letting the landscape dictate the style."
Outside it was completely dark and, thinking of this young-at-heart mountain painter getting up well before me in the morning, I prepared to take my leave.

"This spring," he said at the door, "has been wonderful for me. I have got really excited about it. Isn't it marvellous that at my age I can still get excited about spring?"

Fingers are fine brushes for dipping into wet dabsof mosses blobbed on the palette below the canvas of the crag.
Feet are the pointed ends of sharp pencils, shaped for toning strokes across the grain of the crag.
Eyes trace the steady growth of the composition, the length and proportion of the line on the page of the crag.
Sun holds the source of shadow for the painter and delight in the evening of life amongst the crags. 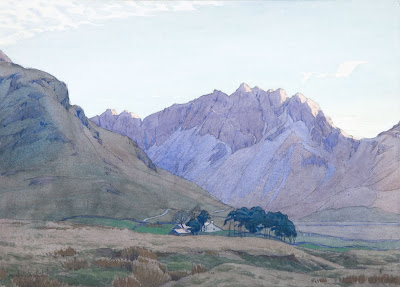