Coming up: John Redhead's Jonah and the Whale 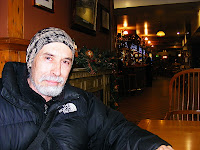 John Redhead remains one of the great controversial figures of British climbing. As one of a handful of rock activists operating at the cutting edge of technical achievement in the late 1970's early 80's, Redhead was never to be considered a rock athlete a la Ron Fawcett, Pete Livesey or Jerry Moffatt. Unique amongst his contemporaries,one could never imagine John doing 2000 press ups before breakfast and religiously structuring his life around pushing his personal limits through a scientific approach to climbing.

Unlike the aforementioned gymnasts-Redhead's exceptional landmark ascents appear to have been achieved more through magic and meditation rather than a rigorous training schedule!
Perhaps this is because he sees himself as a multi media artist who happens to climb rather than a climber who is an artist.

Even today,Redhead routes such as 'Margins of the Mind' E8-7c ( US 5.14) , The Bells-The Bells E7-6c ( US 5.13) and 'Raped by Affection' E7-6c (US 5.13) are test pieces which see few ascents. Little wonder,rock athletes like Ron Fawcett et al saw the Redhead big ticks as an important part of their own personal climbing evolution.

Never one to shy away from controversy,Redhead the climber has ruffled feathers a plenty amongst the stuffed shirts of the UK climbing establishment. Not least through an enthusiastic application of sexual and and gynecological terms to many of his most impressive hard routes names....Cystitus by Proxy, Tormented ejaculation, Menstrual Gossip and Sexual Salami amongst others. Bizarrely described as a 'Misogynist' by some in the climbing media who should know better, John himself describes his more ribald route names as 'celebratory' and displaying creativity and passion.Further outrage has followed some of his written and performed works with members of the audience at a Kendal Mountain Festival leaving the auditorium in droves during a Redhead performance in high dudgeon !
In the mid 1980's Redhead found himself mired in controversy when he was at the centre of the notorious 'The Indian Face Affair'.

'Indian Face' E9-7c (US 5.14c) on North Wales' - and probably the UK's premier mountain crag....Clogwyn Du Arddu- (Cloggy)- remains a route of mythical status. On an abseil inspection Redhead managed to accidentally ( or deliberately if you like conspiracy theories) remove an essential flake at a key point on the line. To compound the felony in the eyes of his accusers,he returned to paint in an acrylic abstract work in the scar before which he had turned up on Johnny D's doorstep to present him with the flake in question !

Quelle outrage from the climbing community on two sacrilegious counts !  Somewhat bizarrely, a Dawes disciple quickly returned to the Indian Face to scrub the Redhead work into oblivion. Something the Welsh climate would have done in twelve months anyway. Somewhere out there a photo remains of the work.

These days John is to found alternating between Llanberis and a home in The Pyrenees. Despite keeping his foot in the climbing door,his main motivation in middle age is pushing at the creative boundaries in vision and sound. A recent exhibition of John's offered the following biography.....

From the age of fourteen, John, born in Yorkshire from Jewish Gypsy origin exhibited and sold his paintings. From self taught artist he became professional and exhibited prolifically through London and the provincial galleries.
In the mountains of North Wales he was an activist and pioneer on rock and his routes are a legacy in British climbing. He led the first ascents of Britain’s first grade E7, The Bells, The Bells, and the first grade of E8, Margins of the Mind. A BBC documentary ‘E9 6c’ and Anglia TV documentary, ‘Clown Ascending’ offer insight into his approach.
His multimedia exhibitions, ‘Shaft of the Dead Man’ and ‘Music of Decline’ attempted to portray the sacrificial aspect to movement on rock.
Whilst sponsored by the Arts Council to study Anazazi rock art and sacred sites in Arizona and New Mexico, he became more aware of the rituals and ceremonial aspect behind image making. His separation from the gallery environment had begun.
Whilst in his Liverpool warehouse studio he completed a series of site specific paintings that were exhibited in a ceremonial circle outdoors under the title, ‘Serious Clowning’. This interactive and controversial performance with an unsuspecting audience confronted a consumer complacent society with the issues of the day.
His ascent of Norwich and Liverpool cathedrals as part of an arts performance with his huge canvasses were documented and filmed.
John’s first limited edition book, ‘…and one for the crow’ of words and images of ascent, achieved cult status and was the first ‘outdoors’ book to be banned in many shops. His sonic exploration of Liverpool streets and heroin addiction, ‘Hero Gone bent’ follows from his extensive research and recorded transcripts of street prostitution.
His second publication was a multimedia investigation into the energy left at Dinorwic Quarry, North Wales. His sound sculpture, Soft Explosive Hard Embrace, is a claim for the sacred land and accompanied the words and images. His film of the same name has featured at mountain film festivals worldwide.
For ten years John has developed his sonic compositions and performance, ‘Talking House Soundscapes’ and ‘Orchestration of the Senses’ and continues to paint huge canvasses from his studio in the mountains of the Pyrenees Orientales, where he now works.

His current work ‘Remains of Occitania’ follows his forensic approach to human occupation of space and returns John to a gallery exhibition.

His third book, ‘Colonist’s Out’, a search for the meaning of home, is due for publication shortly.