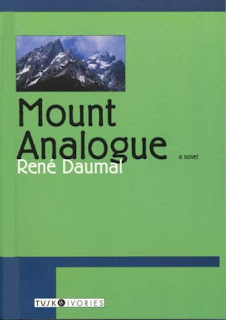 " For some readers the unfinished work is perfect as it stands. Others are down­cast that the team hasn't yet got to grips with the real difficulties of the as­cent. For myself, as commentator, I want some sort of resolution and I choose to take the story further. Of the infinite number of possible outcomes I'll offer my preferred ending. But I can't try to mimic Daumal's lucidity of style or his teasing humour. And I won't introduce any of his sometimes tedious parables. Adopting a more distant viewpoint I'll continue the account from well above his high point.
At last the moment comes when they have by-passed the ice-fall. A half-hour later they can see that they are on the floor of a gigantic cirque with similar passes at intervals all around the rim. Bafflingly, all the numerous summits appear to be of about equal height. Which is Mount Analogue? Where is Mount Analogue? They resolve immediately to traverse onto a nearby shoul­der and establish a new Base. They set up this camp and then spend a tedious fortnight in ferrying up provisions. Finally the day comes when they have to discuss a strategy and it soon becomes clear that the party is not of one mind. In the event four projects are initiated. Sogol wishes to continue alone and won't reveal whatever plan he has. (They wake one morning to find his tent empty. They follow his footprints onto the lateral moraine but can trace him no further.) Pancake, Lapse and Beaver team up to attempt a reconnaissance of the cirque and to try to find a viewpoint from which a culminating summit might be agreed upon. She'll paint each summit, Lapse will try to communi­cate with any groups they come across, Beaver will inventorise rock types and any plants and wildlife existing at this altitude. Hans and Karl settle for the most difficult line on the most monolithic summit nearby: the hardest is always the right way to go. Renee and Theo elect to try the easiest nearby peak: when in doubt take the soft option.
It doesn't feel like a soft option. When they finally top out every other sum­mit appears perceptibly higher. Dispirited they recuperate at Base, which is unoccupied, then set off for another apparently feasible peak. This costs them enormous efforts and on summiting they're depressed to see that their previ­ous high point now seems to loom above them. Not halfway down the hazard­ous descent, still two days above the camp, they pause for a rest, bone-weary. They're tucked up against the rock wall of the couloir, safe from stone fall.'


This Friday, a rare recent article from one of the UK's best outdoor writers, Harold Drasdo. Harold revisits Rene Daumal's cult masterpiece, Mount Analogue. Described in Wikipedia as...
A Novel of Symbolically Authentic Non-Euclidean Adventures in Mountain Climbing... a classic novel by the early 20th century, French, para-surrealist novelist René Daumal.
The novel is both bizarre and allegorical, detailing the discovery and ascent of a mountain, the Mount Analogue of the title, which can only be perceived by realising that one has travelled further in traversing it than one would by travelling in a straight line, and can only be viewed from a particular point when the sun's rays hit the earth at a certain angle.
"Its summit must be inaccessible, but its base accessible to human beings as nature made them. It must be unique and it must exist geographically. The door to the invisible must be visible.".

No...I'm not sure what it means either but Harold being the intellectual does and makes a decent fist of writing the ending of a book which was two chapters away from completion when Daumal died. However,Daumal did leave enough clues in his notes to suggest how the novel could end.