Fred Botterill has never quite created the impact of his Lakeland contemporaries from that Golden Age of exploration in the late 19th, early 20th century. Figures like O G Jones, Haskett-Smith, The Abraham Brothers, Siegfried Herford et al... However, in 1903 the bold Yorkshireman succeeded in creating one of 'the' Lakeland test pieces of the day and one of the UK's early VS (US 5.8) climbs. The futuristic eponymously named slab route on Scafell which was considered so hard at the time that even the great Siegfried Herford backed off it, considering the climb too committing and dangerous without top rope inspection.

Despite creating more classic Cumbrian climbs,notably North West Climb on Pillar Rock and Abbey Climb on The Napes, Fred Botterill effectively gave up the ghost after he was involved in a fatal accident on another hard route of the time, Geoffrey Solly's Victorian tour de force, Eagles' Nest Ridge upon which he saw his leader, Thomas Rennison fall to his death.After that incident until his death in 1920, Fred Botterill withdrew from the rock face and quietly faded from the limelight. 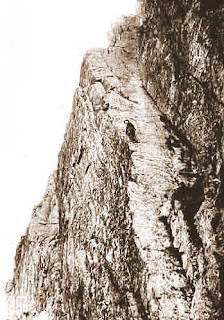 Fred Botterill on the first ascent of Botterill's Slab: Photo JH Taylor courtesy of The Fell and Rock Club©


Clearing away the moss from little cracks here and there I managed to climb slowly upwards for about 60 feet. The holds then dwindled down to little more than finger-end cracks. I looked about me and saw, some 12 feet higher. a nest about a foot square covered with dried grass. Eight feet higher,another nest and a traverse leading back to where the crack opened into a respectable chimney. If I could only reach hold of that first nest what remained would be comparatively easy. It seemed to be a more difficult thing than I had ever done but I was anxious to tackle it. Not wishing to part with the axe I seized it between my teeth and with my fingers in the best available cracks I advanced. I cannot tell with certainty how many holds there were; but I distinctly remember that when within two feet of the nest I had a good hold with my right hand on the face, and so ventured with my left to tear away the dried grass on the nest, However, the grass removed from the ledge, a nice little resting place was exposed-painfully small, but level and quite safe. I scrambled on to it, but on account of the weight of the rope behind me, it was only with great care and some difficulty that I was able to turn round. At last I could sit down on the nest and look around me.

The view was glorious. I could see Scafell Pike and a party round the cairn. Far below was another group intent on watching our movements, a lady being amongst the party. I once read in a book on etiquette that a gentleman in whatever situation of life should never forget his manners towards the other sex, so I raised my hat, though I wonder if the author had ever dreamed of a situation like mine. I now discovered that our 80 feet of rope had quite run out and that my companions had already attached an additional 60 feet. Further, I began to wonder what had become of my axe, and concluded I must unthinkingly have placed it somewhere lower down. There it was, stuck in a little crack about five feet below me. Not knowing what was yet to come I felt I must recover it, so I lowered myself until I could reach it with my foot. I succeeded in balancing it on my boot, but in bringing it up it slipped and clattering on the rocks for a few feet took a final leap and stuck point downwards in the Rake's Progress. Standing up again I recommenced the ascent and climbed on to the second nest au cheval, from where, after a brief rest, I began to traverse back to the crack. This was sensational but perfectly safe. As usual I started with the wrong foot, and after taking two steps was obliged to go back. The next time I started with the left foot, then came the right, again the left, and lastly a long stride with the right, brought me into the chimney. The performance was what might have been called a pas de quatre. Complimentary sounds came from my companions below, but without stopping to acknowledge these I pulled myself up ten feet higher on to a good grass-covered ledge to the right of the crack, smaller but very similar to the Tennis Court Ledge of Moss Ghyll.
'How is it now?' my companions inquired. 'Excellent,' I replied, 'a good belaying pin and just room for three. Do you feel like following?' Without answering me the second man commenced the traverse to the chimney edge whilst I carefully belayed the rope. Up he came in splendid style and without stopping, taking only a quarter of the time it had taken me. He then untied and we threw down the 140 feet of rope to our third, who soon joined us. We hailed a climbing friend who was watching from the Progress and invited him to join us, but he very generously refused and said he would hover near lest we might not be able to advance further and so require the aid of a rope from above. We next christened our berth 'Coffin Ledge' built a cairn on it and left our names on a card.

Starting off again a long stride with the left foot took the leader back into the crack and a stiff climb of 20 to  30 feet landed us all into an extraordinary chimney, which though only wide enough to comfortably admit the body sideways ran right into the crag for about 15 feet. Like the crack below it leaned to the left at angle of 70 degrees or so. About 25 feet up, chock-stones and debris formed a roof, suspended in the middle some six feet below it, were three more chock-stones.When the second man had joined me he exclaimed with astonishment; 'What a place.... How can we get out?' 'Wait a bit,' I answered, although I could not then see a way. However, I went as far as I could into the crack and with restricted use of back and knee climbed upwards until the level of the suspended chock‑stones was reached; from there a narrow ledge rendered these easily accessible. They were securely wedged and safe to stand upon. The ledge continued along out of the crack until the most outward chock-stone of the roof was within reach.
I seized with both hands, and a steady pull upwards landed me into the Putrell Chimney of Keswick Brothers' Climb. 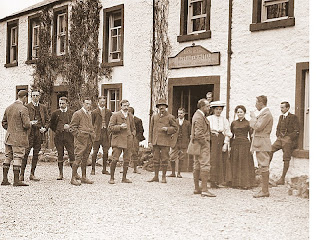 At the Corrie of the Black Raven 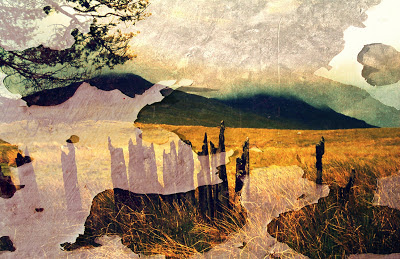